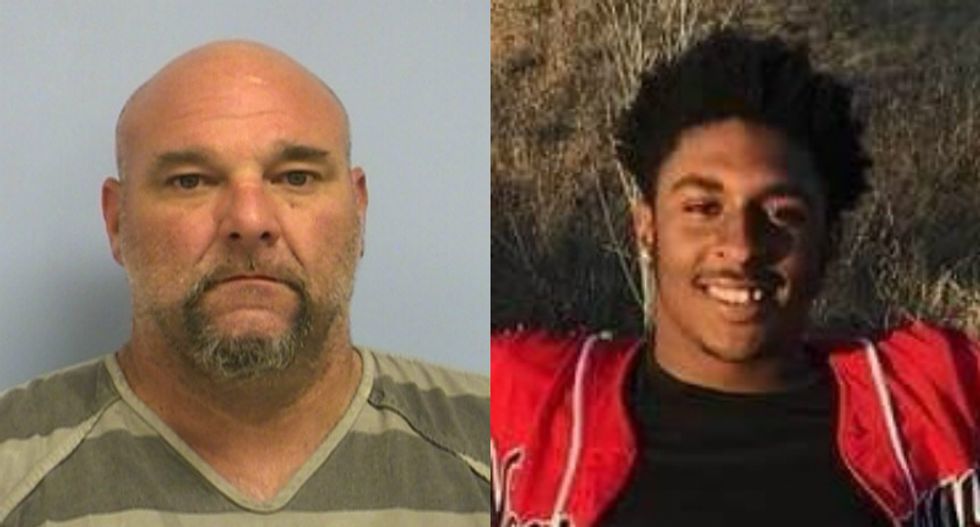 Jason Roche's mugshot (left, via Travis County) and a photo of Devonte Ortiz (right, via a GoFundMe page created by his family).

A white man in Austin has been charged with first-degree murder after shooting and killing a black teen over a fireworks dispute early on Independence Day.

The Austin-American Statesmen reported Friday that 41-year-old Jason Roche claimed he shot 19-year-old Devonte Ortiz in self-defense after the young man allegedly reached for his gun. According to police, video evidence taken at the scene of the crime proved otherwise.

Roche told police in his sworn affidavit that he shot Ortiz after coming outside for a second time early on the morning of July 4 to ask him and his friends to stop shooting fireworks. In his testimony, the older man claimed he saw the teen reach for a gun that he'd taken out of his car. The Statesmen's report noted that although police did find a rifle and a handgun at the scene, cell phone video shows that Ortiz was not holding a gun when Roche shot him.

The affidavit also noted that the older man was seen in cell phone video following Ortiz around a car, and that "police believe Ortiz was moving away from the firearm and not lunging toward it like Roche had told detectives."

Roche made headlines in April when he sued the city of Austin and Austin-Travis County Emergency Medical Services after EMTs treated a police officer he hit with his truck before him.

According to a GoFundMe page created by Ortiz's family, the young man was an honor roll student at the William B. Travis Early College High School, where he graduated in 2017. Commentary about his killing on Twitter also revealed that he was a star football player with the Travis Rebels football team. His family and friends are holding a memorial for him at the school's football field on Friday night.

"My cousin was shot and killed earlier this morning by a racist ignorant white man for popping fireworks," Ortiz's relative tweeted shortly after the teen's death.

"I am tired of this," he added. "I lost a brother, cousin and friend. This world is cruel and dangerous. White people have a reputation of killing young black teens. His voice will live on."