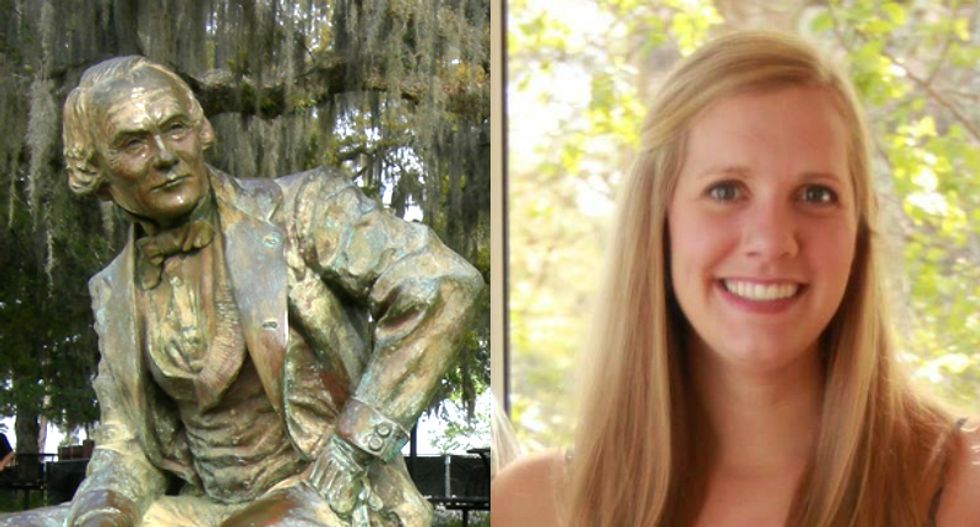 In a Facebook post, a white woman who counts slave-owning Florida State University founder Francis Eppes as an ancestor bemoaned the school's decision to remove a statue of him after public outcry.

"There he goes," a woman named Megan Eppes Barnes posted alongside a video of workers removing the statue. "Under the cover of the night Florida State is erasing its own history."

"I am proud to be an Eppes and proud to be the great, great, great granddaughter of the founder of FSU," she wrote. "How sad that [FSU President John] Thrasher was so easily convinced to overlook all of the accomplishments and generosity of Francis Eppes and cave to the noisy few that think he is unworthy of recognition."

A statement released by FSU's president, however, revealed that Eppes was not a founder of the college after all.

After the violent white supremacist rally in Charlottesville, Virginia — ostensibly a right-wing demonstration to "protect" the statue of Confederate General Robert E. Lee — resulted in the death of Heather Heyer last year, Thrasher convened a 15-person panel consisting of students, faculty, staff and alumni to examine the school's buildings and statues.

The President’s Advisory Panel on University Namings and Recognitions recommended that the school both remove the Eppes statue and rename the FSU College of Criminology and Criminal Justice building known as "Eppes Hall" after its investigation revealed that the man's role in founding the school was "overstated."

"The panel uncovered sufficient new evidence to dispute the claim that Eppes was the sole founder of FSU," Thrasher wrote in a letter explaining his decision. "It's clear that Eppes had an important part to play in the early days of this institution's history but declaring him 'the founder' is overstating his role."

He went on to write that the statue is to be removed from the school's Westcott Plaza at the front gates of the campus because it gave "Eppes a level of prominence that is simply not appropriate."

It will be relocated and that both highlights Eppes' role establishing FSU's "institutional predecessor and keeping the school going in its early years." The marker "should also acknowledge that Eppes was, in fact, a slave owner, and as a justice of the peace, he oversaw the capture of escaped slaves."

Thrasher declined to rename Eppes Hall, but stipulated that a similar marker commenting both on his biography (including that he was a grandson of Thomas Jefferson's) and his slave ownership will be placed near the building.

Eppes' great-great-great granddaughter was not the only one who blamed the relocation of the statue on the school kowtowing to anti-racist activists. In a statement released on Twitter, the FSU College Republicans said Thrasher "decided to cave to the whims of the loud minority" intent on "destroying the fabric of history."