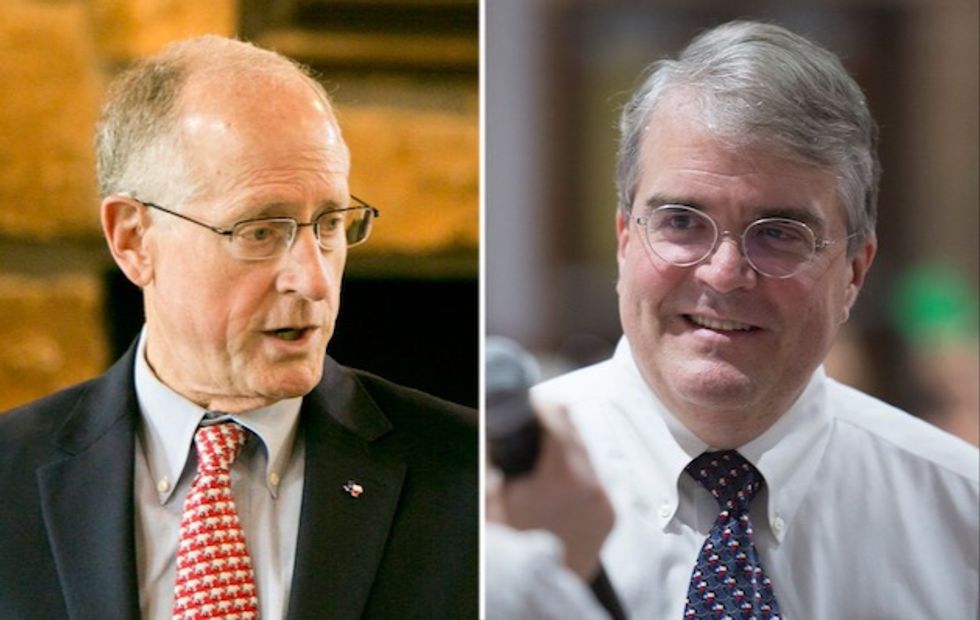 Two members of Congress from Texas — Republican U.S. Reps. Mike Conaway of Midland and John Culberson of Houston — purchased stock in a company last year that is now at the center of insider trading charges against one of their colleagues, U.S. Rep. Chris Collins, R-New York.

Collins, best known as the first congressman to back Donald Trump's 2016 presidential bid, was indicted Wednesday by federal prosecutors and charged with securities fraud, wire fraud and making false statements to the FBI. The indictment stems from his involvement in an Australian biotech firm called Innate Immunotherapeutics, and it alleges he passed non-public information about the company to his son, Cameron, who then used it to purchase stock and tip off others.

Conaway and Culberson are not named in the indictment and face no allegations of wrongdoing. But they were among several of Collins' colleagues who purchased shares of Innate last year and faced some scrutiny for it, especially after reports surfaced that Collins was seeking to convince them and other associates to invest. Collins, who has denied any wrongdoing, was already being investigated by the House Ethics Committee before the indictment was unveiled Wednesday.

Both Conaway and Culberson bought stock in Innate on Jan. 26, 2017, worth between $1,001 and $15,000, according to personal financial statements filed with the House clerk. Their purchases came two days after a contentious confirmation hearing for U.S. Rep. Tom Price, R-Georgia, then Trump's nominee for secretary of health and human services, during which he was questioned over his own investment in Innate. Conaway purchased more of the stock on Feb. 3, 2017, again valued at between $1,001 and $15,000.

Culberson sold his stock on June 12, 2017 — 10 days before Chris Collins is accused of sharing the non-public information with his son. Conaway, meanwhile, dumped all his shares in November 2017, according to a spokesperson for his office.

Culberson has long maintained his investment in Innate was prompted by media reports about the company and its efforts to treat multiple sclerosis, which he reiterated in a statement he issued after parting ways with the stock.

"My investment in Innate stock occurred after I read a high-profile story in the New York Times about the company and their work on a cure for MS, which is a cause very dear to me," Culberson said in a statement. "I then did my own research on the internet, bought $13,982 worth of shares, lost $9,194 when I sold them, and filed the usual financial disclosures required of all members of Congress. This is all public information and as the report shows, I sold the stock on June 12th simply to cut my losses."

As the Houston Chronicle noted at the time, there was a story in The New York Times about Innate two weeks before Culberson purchased stock in it, but the story was not particularly bullish on the firm. The article called Innate "a tiny pharmaceutical company from Australia that has no approved drugs and no backing from flashy venture capital firms," and it added that multiple times "the company has run out of money and nearly closed its doors."

After news of the Collins indictment broke, Conaway's office provided a statement that, like Culberson's, cited MS treatment as his reason for investing in Innate.

"Mr. Conaway initially invested in Innate Immunotheraputics because it was a promising breakthrough to treat Multiple Sclerosis (MS), which impacts a close friend of his," Conaway spokeswoman Emily Hytha said. "Strict ethics laws and reporting requirements regulate investments made by Members of Congress, which Mr. Conaway follows without exception."

The fallout from the indictment could be more of a political problem for Culberson, who is among national Democrats’ top three targets in Texas this fall. The Democratic Congressional Campaign Committee singled out Culberson in a statement after the charges against Collins were revealed, and his opponent, Lizzie Pannill Fletcher, said in her own statement that the indictment "raises serious questions."