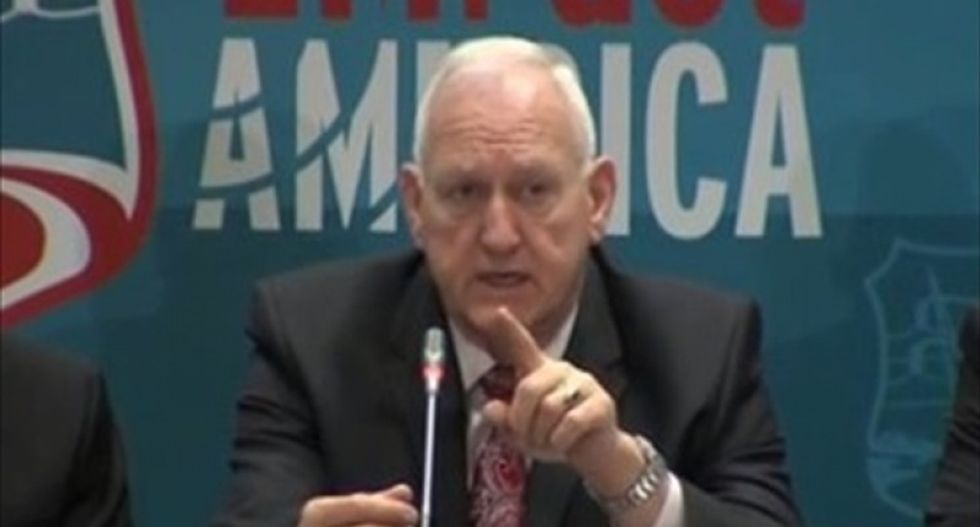 Whether Democrats retake the U.S. Senate and/or the U.S. House of Representatives in November will come down to one thing about all else: turnout. Opponents of President Donald Trump are motivated, but so are Trump supporters—and that includes far-right evangelists, who will be urging their unquestioning followers to go out and vote for pro-Trump candidates. Not all right-wingers are fans of the Christian Right; for example, Gary Johnson, former Republican governor of New Mexico and the Libertarian Party’s presidential candidate in 2012 and 2016, believes that the Christian Right has been terrible for the GOP brand and the conservative movement. But Trump, although hardly a religious scholar, has been more than happy to pander to the Christian Right—and he knows that fanatics like Tony Perkins and James Dobson could get numerous social conservatives to the polls in November, especially with the future of the U.S. Supreme Court hanging in the balance.

Here are five pro-Trump Christian fundamentalists who could do a lot to drive evangelical voter turnout in 2018.

In 2016, Tony Perkins—president of the Family Research Council—endorsed Sen. Ted Cruz for president and campaigned for him aggressively. But when Trump received the GOP’s presidential nomination, it didn’t take Perkins long to form a bond with the brash real estate developer and reality TV star. And Perkins remains one of Trump’s most ardent supporters despite allegations that he had extramarital affairs with a porn star (Stormy Daniels) and a Playboy model (Karen McDougal) and paid them hush money to keep quiet. As Perkins sees it, Trump deserves a “mulligan” because—as he told CNN’s Erin Burnett in an interview—he “has followed through on his promises to evangelicals.” And that includes nominating severe social conservatives of the Antonin Scalia/Clarence Thomas variety for the U.S. Supreme Court: first Neil Gorsuch, now Brett Kavanaugh. Perkins considers Trump the most pro-Christian president in recent memory, and he is hoping that Congress will have even more Trump-supporting theocrats after the midterms.

Franklin Graham, 66-year-old son of the late Rev. Billy Graham, recently became the butt of jokes after issuing a stern warning to Christians and the media: support Trump or face the wrath of God. According to Graham, God Himself wanted Trump to become president—and Graham even quoted scripture to explain why it was ungodly and immoral to bring up Trump’s alleged trysts with a porn star and a Playboy model. But as much as Graham has been mocked and ridiculed for giving Trump a pass despite having lambasted President Bill Clinton for his affair with intern Monica Lewinsky in the 1990s, his followers take him seriously. And if Graham tells them to vote for a lot of pro-Trump Republicans in November, they will gladly obey.

Like Graham, James Dobson (who founded Focus on the Family in 1977 and the Family Research Council in 1981) believes that God Himself wanted Trump to win the presidential election in 2016—and earlier this year, the 82-year-old theocrat urged Christians to fast and pray in order to provide a protective shield that will keep Trump from being impeached. “It seemed evident on Election Night that the Lord gave us victory,” Dobson declared. “So Lord, if that is true, we ask you to protect our president from anything that could hurt him.” According to Dobson, Trump is doing God’s work by opposing abortion and packing the U.S. Supreme Court with social conservatives—and as the midterms approach, he will be doing everything he can to help pro-Trump Republicans get elected.

In the 1980s, the late Rev. Jerry Falwell, Sr.—the former segregationist who founded the Moral Majority and Liberty University—did a lot to make the Christian Right and the Republican Party inseparable. And just as Falwell (who died in 2007) campaigned aggressively for President Ronald Reagan in 1980 and 1984, his son Jerry Falwell, Jr. (now 56) has been an unwavering Trump supporter. Falwell hasn’t been swayed a bit by Trump’s alleged extramarital affairs; he has even banned anti-Trump evangelist Jonathan Martin from Liberty University altogether. And as the leader of one of the Christian Right’s most profitable empires, Falwell can be counted on to give pro-Trump Republicans a great deal of support this year.

Jerry Boykin, vice president of the Family Research Council, believes that God Himself made certain that Trump was elected in 2016. When Boykin appeared on evangelist Jim Bakker’s show in March, he described opposition to Trump as “diabolical” and asserted that “God’s imprint” was all over Trump’s presidential win. As Boykin sees it, Trump is doing God’s work—and he will no doubt be endorsing Republican candidates who can help the president get that work done.