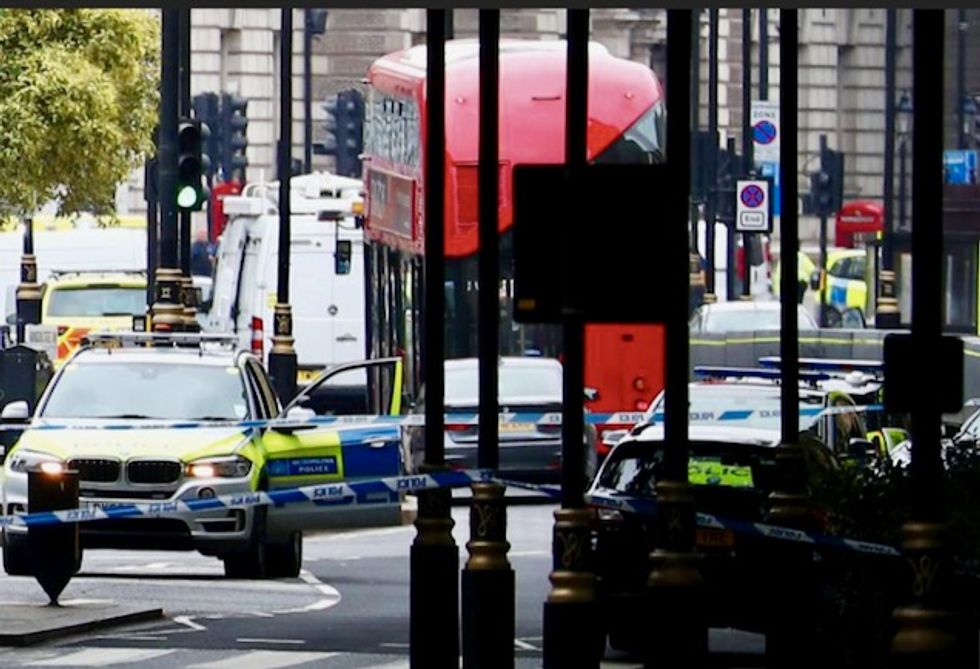 A car that crashed outside the Houses of Parliament is surrounded by members of the emergency services in Westminster, London, Britain, August 14, 2018. REUTERS/Hannah McKay

Two people were injured when a car drove into security barriers outside the British parliament on Tuesday and the driver was arrested, emergency services said, with counter-terrorism police leading the investigation into the incident.

Neither of those hurt were believed to have suffered serious injuries and police said they were trying to piece together what had happened.

“While we are keeping an open mind, the Met’s Counter-Terrorism Command is leading the investigation into the #Westminster incident,” London’s Metropolitan Police said on Twitter.

Earlier, police said the male driver of the car had been arrested at the scene of the crash which occurred at 0637 GMT.

Witness Jason Williams said the car had struck a barrier on a lane used for access to the parliament building with force. He said he thought it was deliberate.

“It’s a very serious incident,” he told reporters. “There was smoke coming from the vehicle.”

Images shot by a Euronews journalist showed police pointing their guns at a vehicle. Footage on social media showed a handcuffed man being led away by heavily armed police. Other footage showed a cyclist lying on the street.

“I saw the cyclists, injured cyclists. I’ve seen people, about 10, on the road, lying down, but I haven’t seen any fatalities,” Williams said.

London’s Ambulance Service said it had treated two people for injuries at the scene and they had been taken to hospital. Their injuries were not believed to be serious.

Westminster Underground station, close to parliament, was closed to the public and the building cordoned off.

Parliament is in summer recess and most lawmakers are not using the building. Prime Minister Theresa May is on holiday abroad.

In March 2017, Khalid Masood, 52, killed four people on nearby Westminster Bridge before he stabbed to death an unarmed police officer in the grounds of parliament. He was shot dead at the scene. It was the first of five attacks on Britain last year which police blamed on terrorism.

Britain is on its second highest threat level of “severe”, meaning an attack by militants is considered highly likely.

In October last year, 11 people were injured when a car collided with pedestrians near London’s Natural History Museum, raising fears of an attack, but police later said the incident was a road traffic accident.