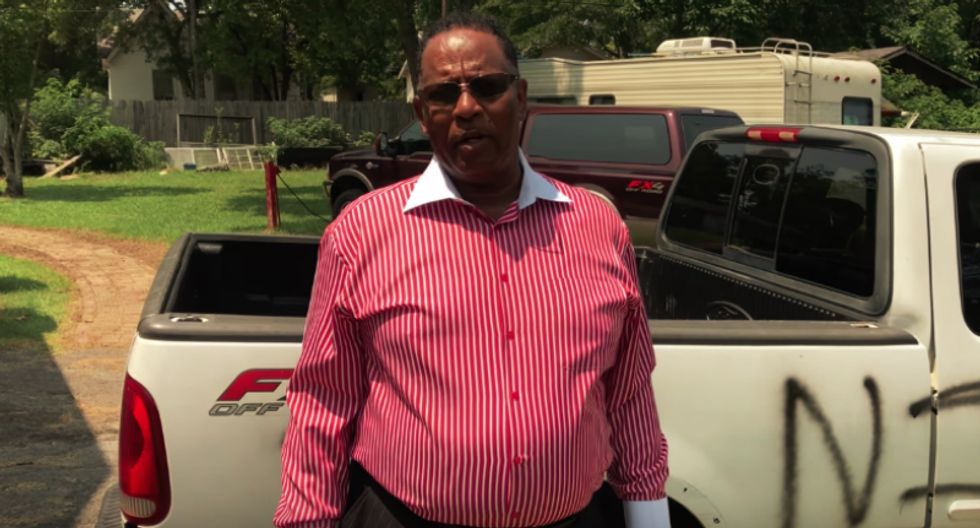 Gadsden, AL's Pastor K. Solomon Williams stands in front of his truck after it was vandalized. Image via screengrab.

A black pastor in Alabama said he plans to invoke "stand your ground" laws next time vandals spray paint slurs and swastikas on his truck.

Birmingham's WBRC reported that Pastor K. Solomon Williams woke up this past Sunday morning to find his truck covered on three sides with bigoted language and symbols. Williams, who preaches at Mount Pleasant CME Church in Piedmont, AL, told the news station he thinks he knows who did it.

Along with the vandalism, the perpetrators "flattened all four of the truck's tires, broke the side windows and put Rev. Williams' garden hose into the cab's interior and left the water running," WBRC's report noted.

The pastor said that when and if the vandals come back, he may invoke the state's "stand your ground" law allowing him to defend himself and his property with a weapon.

"If they come back on my property, I know this is a stand-your-ground state," Rev. Williams told WBRC. "And so, I'm not going to let someone come and hurt my family at any given time. And I'll stand my ground if I have to."

The pastor moved to the Gadsden, Alabama — the city made infamous by former Judge Roy Moore — four years ago. He told The Gadsden Times he didn't want to bring any more negative light to the city.

"There are some good people in Gadsden," the pastor said.

Williams added he'd intended on giving the 2003 Ford to his son.

You can watch video of the pastor discussing the vandalism that includes footage of the slurs and symbols below, via The Gadsden Times.