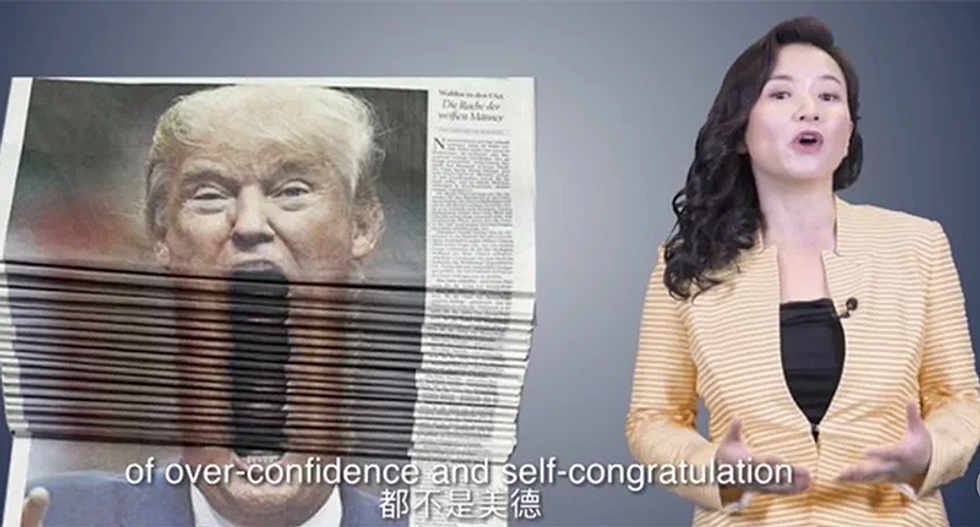 President Donald Trump's tariffs are frustrating everyone from farmers to his own advisors. But China is saying "thanks" for helping give them an extra boost with foreign investors.

Politico, in conjunction with the China Morning Post, reported Wednesday that China's largest state network created a satirical video saying, "Thanks Mr. Trump, you are GREAT!"

The video, which has since been deleted, is a kind of love letter to Donald Trump thanking him for everything he's done for China. It then goes on to discuss the concerns with the trade war.

They sarcastically thanked Trump for helping the rest of the world come together and "bond" over economic reforms. They noted that it helped lure other foreign investors to China, specifically citing Tesla.

“Dear Mr Trump, Thank you for the shock therapy about how far apart China and the US are and why it’s imperative they get on the same page,” the letter says as it's read by CGTN business anchor Cheng Lei.

It covered a few issues with the trade war, then explained how China has benefited from the Trump policy.

“Thank you for re-instilling in the Chinese a sense of HUMILITY. How can there be enough gratitude for highlighting the foibles of overconfidence and self-congratulation, never a virtue except in your case,” Cheng continued.

It also argued whether China's retaliation for the tariffs on U.S. food and drink imports will improve the country's health and wellness.

“On behalf of doctors, thank you for pointing out the need to wean off American goods like bourbon and bacon,” the letter said.

The video did agree that the "WTO needs reform" and thanked the US for spelling out "China's shortcomings" that helped them make "tough reforms" and bringing in new investors.

Tesla announced in July that they would be building a new plant in Shanghai. It will be the first plant fully owned by a foreign company.

The Chinese state media then gave its own take on Trump's war with the media.

“Most of all, thank you for discrediting news media at large, so we need to be doubly sure that we’re not producing fake news. You are GREAT!” said Cheng said. She then gave the president her "love."