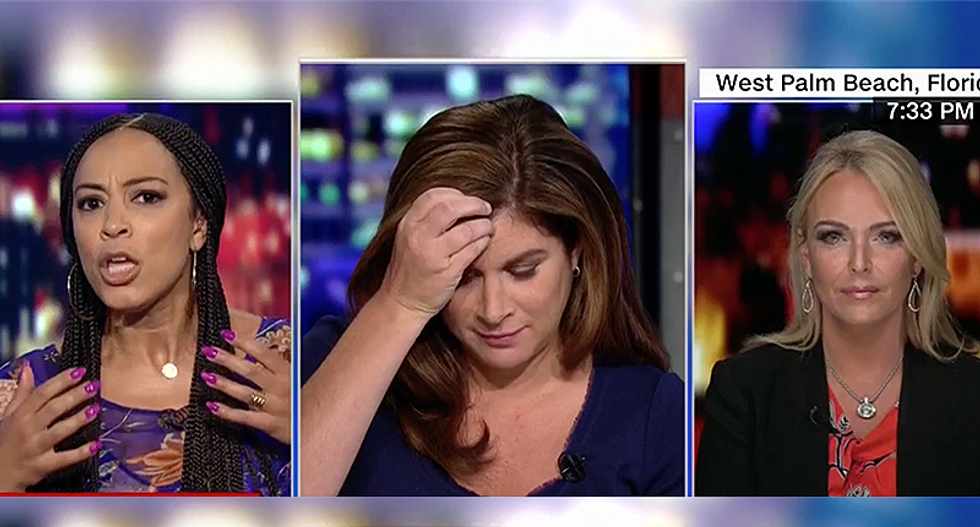 A panel discussion about people of color in the West Wing of the White House got heated on CNN's "Out Front with Erin Burnett."

Press secretary Sarah Huckabee Sanders refused to answer questions about how many black staffers work in the West Wing when asked by reporters.

Trump ally Gina Loudon claimed that she isn't sure it's necessary to have a certain number of people of color on staff because civil rights laws and women's rights laws were passed by presidents who didn't have diverse staffs. She said that the list she looked at revealed a full third of minority staffers or women. That, however, does not pinpoint the West Wing, where the president's aides were located.

"The fact we have to count people based on skin color, I don't like that," she said.

Angela Rye was aghast while Loudon attempted to justify the lack of diversity.

"I think I got stuck at Gina saying that American presidents have done a great deal for people of color like ending slavery? I think I'm stuck in 1865 now," she said.

Loudon argued it was a Republican president who passed civil rights.

"And that's great, sis, but you missed the mark," Rye said. "For you to have to say that we don't necessarily need diversity in this White House."

Loudon cut in, saying that Rye was mischaracterizing what she said.

"Let me tell you what I heard, I don't think you hardly understand," Rye continued while Loudon talked over her. "You're not going to keep talking over me. My black life matters and so does my voice. Listen to what I'm saying to you. What you said was deeply offensive."

Rye went on to say that it is unacceptable to create such a comparison in 2018.

"What I am telling you is you can't say, at least you shouldn't feel comfortable saying it in 2018 -- that this White House not having diversity can be akin to presidents who didn't have black people on their staff (but for slavery) freeing slaves!" Rye said.

She urged Loudon to "RIP" her talking points because the numbers are pathetically low. Rye went on to say that regardless of the talking points, the reason the White House can't get staffers of color is that their options are slim.

"You know why? Because nobody wants to work for a racist," Rye said. "There's not a single senior black person in the White House, and don't you dare say Ben Carson, because he doesn't work there. How dare his gifted hands -- who is a brain surgeon and who has never done anything on a construction project become the Secretary of Housing and Urban Development."

Loudon then pivoted to say that she has an adopted minority son with Down Syndrom, so she understands Rye's perspective.

"America has never been great," Rye responded. "It is not great because people like you come on and lie for the president of the United States and tout -- bring out your son as an example? You should be completely ashamed of yourself!"