CNN’s Jim Acosta blasts Trump for lying to his supporters: He has given up on his wall -- except ‘as a campaign tool’ 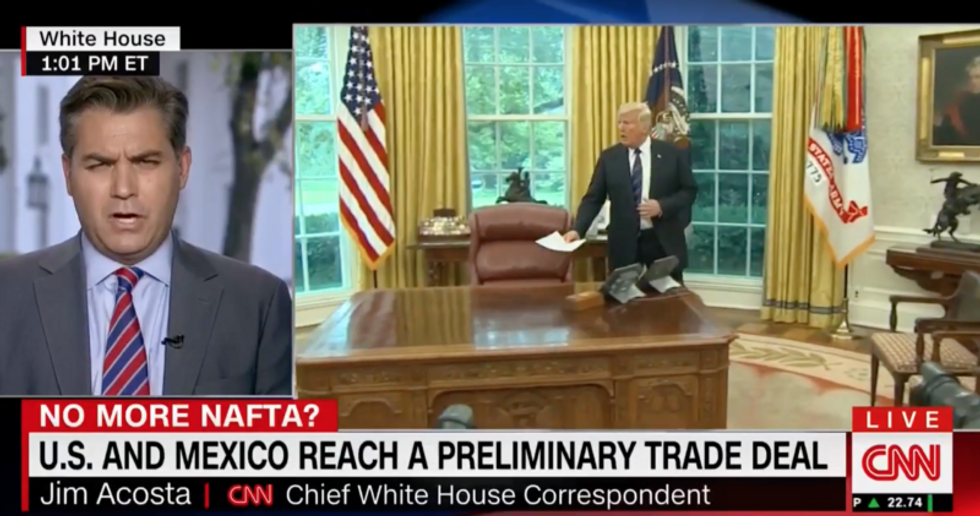 CNN's Jim Acosta didn't seem to think much of President Trump's proposed new bilateral trade deal with Mexico, telling Wolf Blitzer the deal was meant to pressure Canada to return to trade negotiations. Acosta also noted that the president said nothing about the long-promised wall that Mexico would pay for during the often rambling speakerphone conference he had today with that country's President Enrique Peña Nieto.

"In the middle of all of this is sort of this glaring fact that you have some pretty rough relations going on right now between the president and the Canadian Prime Minister, Justin Trudeau," said Acosta. "I think it's inescapable that the president reached this trade deal with Mexico, its outgoing president and incoming president as a way to try to get Canada back to the negotiating table."

Acosta said that while "the president is trying to position this as a big political win for him heading into the midterm campaign cycle," the result has been "glaring bad relations between the president, this White House and the Canadians as they're apparently not part of this agreement."

But it was when Wolf brought up Trump's long-promised border wall that Acosta really got rolling. "We've heard from not a single White House official who has ever explained how that's going to happen, so it sounds like for all practical purposes the president has given up on that," Acosta said.

"But he's not given up on it as a campaign tool," Acosta continued. "We hear about his vision for a wall at just about every campaign rally. and he claims falsely that what he presented to the voters during the campaign is being built on the U.S./Mexico border. Of course we know, Wolf, there's very little wall construction going on down there."