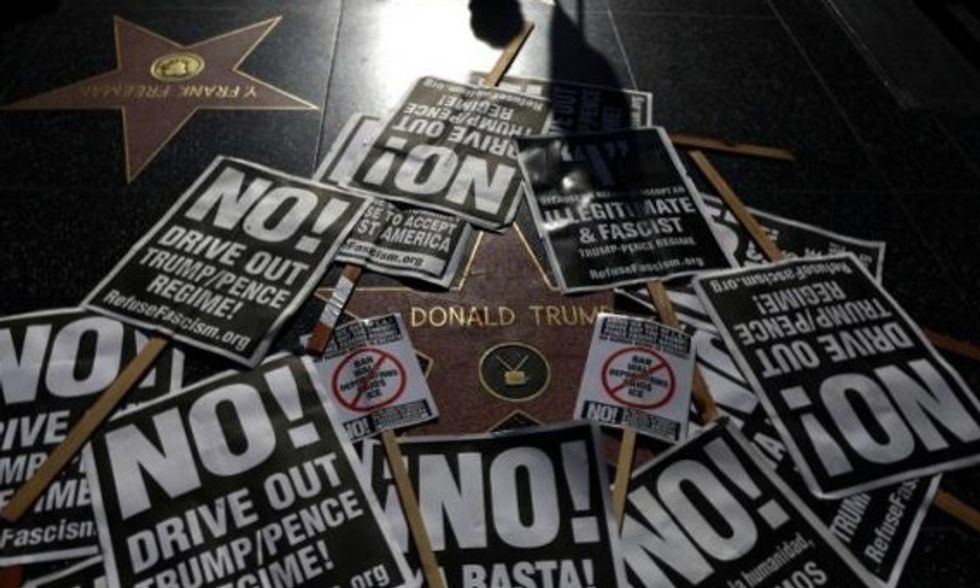 Two men with pickaxes have tried and failed to remove U.S. President Donald Trump’s star from the Hollywood Walk of Fame but now it is West Hollywood City Council’s turn.

The councilors voted unanimously on Monday evening for getting rid of the brass and terrazzo star, embedded in the landmark stretch of a tourist-thronged Los Angeles sidewalk.

The vote is largely symbolic: the council has no jurisdiction over the Walk of Fame in neighboring Hollywood, and voted only to urge the Hollywood Chamber of Commerce, which runs the attraction, to remove it.

The star has become the setting for various anti-Trump protests since the maverick Republican announced his presidential run in 2015, and has been pulverized twice by men with heavy tools, only to be swiftly repaired.

In passing its resolution, which was announced by West Hollywood Mayor John Duran, the council said the man honored by the star does not reflect the values of West Hollywood, one of the country’s most liberal corners.

The resolution cited allegations by several women who claim that Trump sexually harassed them, which he has denied. It also pointed out his policy, recently scrapped, of splitting up asylum-seeking migrant families at the U.S. border with Mexico.

The Hollywood Chamber of Commerce has never removed a star from the Walk of Fame, which honors celebrities from the entertainment industry, and has flatly rebuffed calls to strip the honor from any of the recent spate of powerful men accused of sexual misconduct.

“As of now, there are no plans to remove any stars from the Hollywood Walk of Fame,” Leron Gubler, the chamber president, said in a statement, according to NBC News. The council’s request would be considered at the chamber’s next meeting, he said.

A committee considers nominations once a year for celebrities to be added to the Walk of Fame, and currently charges the nominee’s sponsor $40,000 for the honor.

Trump’s star was added in 2007 in recognition of his television work prior to his entry into politics, including his hosting of the NBC show “The Apprentice” and his producing of the Miss Universe beauty pageants.