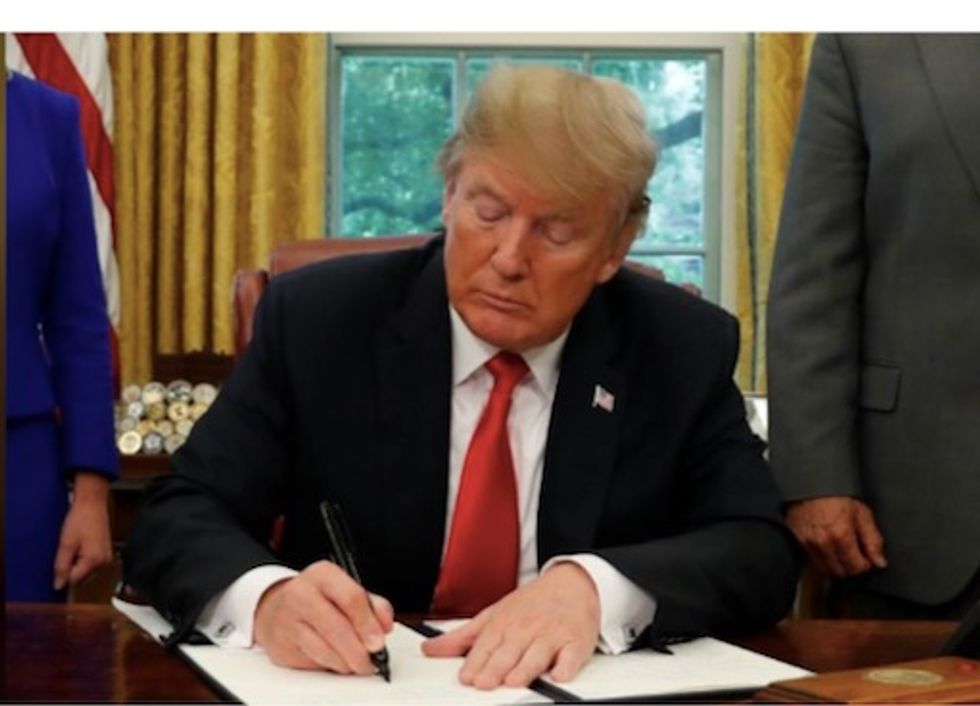 U.S. President Donald Trump said on Monday he would “most likely” meet again with North Korean leader Kim Jong Un, while defending his efforts to convince Pyongyang to give up its nuclear weapons.

In an interview with Reuters, Trump, who held a landmark summit with Kim on June 12, said he believed North Korea had taken specific steps toward denuclearization, despite widespread doubts about Kim’s willingness to abandon his arsenal.

While insisting that “a lot of good things are happening” with North Korea, Trump complained that China was not helping as much as it had in the past because of its trade dispute with the United States.

At their summit in Singapore, Kim agreed in broad terms to work toward denuclearization of the Korean peninsula but North Korea has given no indication it is willing to give up its weapons unilaterally as the Trump administration has demanded.

Trump has hailed the Singapore summit as a success and went as far as saying North Korea no longer posed a nuclear threat.

South Korea’s presidential Blue House said on Tuesday Trump’s mention of the possibility of another summit with Kim could be a sign of progress in their relations.

“We think it is part of a process for achieving the two leaders’ resolve for the denuclearisation and peace of the Korean peninsula,” spokesman Kim Eui-kyeom told reporters.

Kim Jong Un and South Korea’s President Moon Jae-in agreed at their summit in April to push to declare an official end to the 1950-53 Korean War together with the United States.

Seoul officials see the U.N. General Assembly in New York next month as a desirable venue for the declaration but said they are flexible about its formality.

The Washington-based think tank 38 North reported last month that satellite images indicated North Korea had begun dismantling key facilities at a site used to develop engines for ballistic missiles, in a first step toward fulfilling a pledge U.S. officials say he made to Trump at the summit.

However, several members of the U.S. negotiating team, speaking on the condition of anonymity, said they had seen no progress toward denuclearization and no sign that North Korea was prepared to negotiate seriously until the United States promised relief from sanctions in return.

In the interview, Trump credited his “great chemistry” with Kim for easing a nuclear standoff that last year raised fears of a new Korean war.

“I like him. He likes me,” he said. “There’s no ballistic missiles going up, there’s a lot of silence ... I have very good personal relations with Chairman Kim, and I think that’s what holds it together.”

Asked whether another meeting with Kim was on the horizon, Trump said: “It’s most likely we will, but I just don’t want to comment.” But he offered no details on the timing or venue.

Critics say Trump made too many concessions to Kim by agreeing to hold the summit in the first place and then suspending joint U.S.-South Korea military drills while gaining little in return.

Asked whether North Korea had taken specific steps to denuclearize other than blowing up its main nuclear bomb test site ahead of the summit, Trump: “I do believe they have.” But he did not elaborate.

Additional reporting by John Walcott in WASHINGTON and Hyonhee Shin in SEOUL; Writing by Matt Spetalnick and David Brunnstrom; Editing by James Dalgleish and Michael Perry

On Tuesday, WBBJ-TV reported that a principal in Trenton, Tennessee will not be disciplined over his use of the N-word during a student assembly at Trenton Rosenwald Middle School.

"A video captured on-site shows what appears to be Principal Paul Pillow using a derogatory term as he addressed the school body," reported Jessica Davis. "This video was recorded by a student during morning of the meeting."

Trump's lawyers are 'painted into a corner' as they face special master grilling: former FBI agent

Tuesday afternoon, attorneys for Donald Trump will be confronted by United States District Judge Raymond Dearie, where he is expected to grill them over a batch of disputed top secret documents the former president declassified as they try and put roadblocks in front of a DOJ investigation.

Dearie was appointed to the position of special master -- with the Trump team's approval last week -- to oversee a legal squabble over certain documents the former president took to his Mar-a-Lago estate. The documents were retrieved by FBI agents armed with a warrant on August 8.

Elton John to perform at the White House

Elton John is to perform at the White House this week in a commemoration of his record-breaking career as the British superstar continues his marathon global farewell tour.

President Joe Biden and First Lady Jill Biden will host the "Rocket Man" singer for "A Night When Hope and History Rhyme" on the South Lawn on Friday, the White House announced.