Donald Trump's worst nightmare may come in the form of Rep. Elijah Cummings 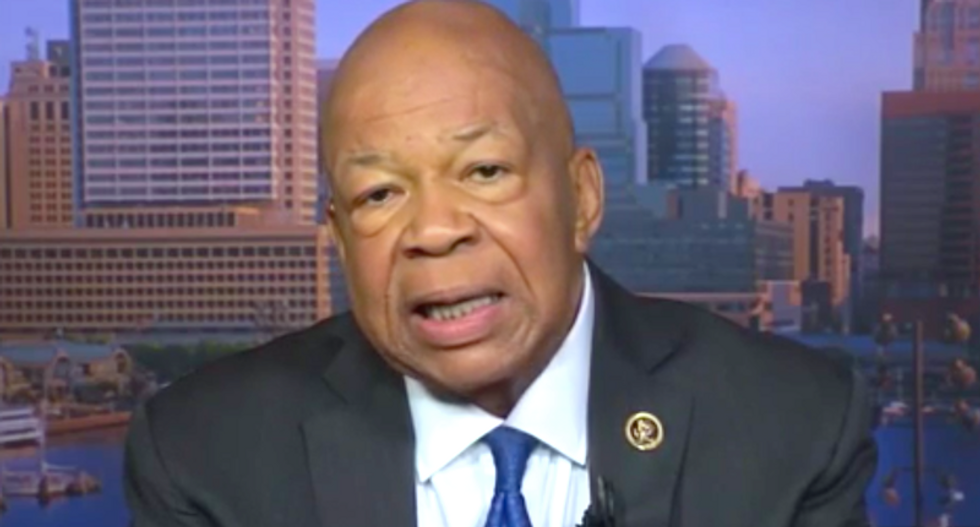 An agenda is taking shape that could have a paralyzing effect on the Trump administration, as Democrats on the House oversight committee begin to take decisive action in response to recent revelations and the conduct of the president.

In the last week, the panel’s top Democrat, Rep. Elijah Cummings (D-Md.), has requested documents to investigate how and why President Donald Trump revoked the security clearance of former CIA Director John Brennan. Cummings also wrote to Secretary of State Mike Pompeo to express concern over the appointment of Brian Hook to the State Department’s Iran Action Group despite Hook’s hostile relationship with employees in the department.

The White House and Gowdy will, of course, ignore Cummings’ letters and requests. To date, the committee’s Republicans have blocked 52 attempts by Democrats to force votes on subpoena motions. Without the power of the majority, Democrats have been relegated to spectator status as the Republican majority abdicates its oversight responsibilities to protect Trump.

Come November, however, the Trump administration may face a situation where there’s no Republican majority there to protect the president. For the first time, it could be facing legitimate scrutiny and oversight from the legislative branch and the House Oversight and Government Reform Committee (OGR).

The thing you should know about OGR is that unlike all of the other congressional committees, this one exists to serve as the watchdog of the federal government. OGR’s mandate is to investigate, not legislate. The chairman wields a tremendous amount of power, with unlimited jurisdiction and the unilateral authority to issue subpoenas and compel testimony for public congressional hearings.

Former Chairman Darrell Issa (R-Calif.), for whom I worked, issued more than 100 subpoenas to the Obama administration. To date, Gowdy has issued a grand total of zero subpoenas to the Trump administration. The OGR Republicans have refused to hold the Trump administration to the same standard of oversight we established during the Obama presidency. The committee’s Republicans have cravenly abdicated their oversight responsibilities, choosing instead to look the other way despite exhaustive displays of waste, fraud, abuse and mismanagement.

But thanks to voters and Elijah Cummings, that might change.

When Republicans took the majority in 2010, Democrats elevated Elijah Cummings to the ranking member position to act as a foil to the hyper-aggressive Issa, who for two years in the minority ran roughshod over the mild-mannered Democratic Chairman Ed Towns of New York. Cummings was patient, strategic and most importantly disciplined. He was everything that we in the new majority were not, and it’s no accident that as time went on, Cummings’ stature grew while Issa’s shrank.

If Democrats retake the majority in November, Cummings will no longer have to rely on Trey Gowdy to call hearings, summon witnesses and subpoena documents. He will have the authority to pursue answers to all of his questions. To call hearings on any topic he sees fit. To depose any administration official he wants to question. There’s no question in my mind that White House chief of staff John Kelly will be the focal point of a hearing about White House security clearance procedures. White House senior adviser Jared Kushner will be asked to explain the questionable intersection of his government job and his business enterprises. Veterans Affairs chief Robert Wilkie will be called to testify about the relationship between officials at the department and members of Trump’s private Mar-a-Lago club.

The Trump administration will be put on trial and the full scope of its corruption will be exposed. Congressional hearings will be covered wall-to-wall on cable news, dominating news cycle after news cycle. Trump, more than any president in history, evaluates his success based on how the media covers the day. A barrage of hearings and subpoenas will have a deteriorating effect on Trump and completely stall the White House’s agenda.

Cummings is a forceful speaker and a deliberate operator. He cannot be bullied or intimidated. He will not be goaded into making a mistake. He has the tools and the authority to compel cooperation and documents. Unlike special counsel Robert Mueller, he cannot be fired by the president or dismissed by the attorney general. Make no mistake about it: Elijah Cummings could turn out to be Donald Trump’s worst nightmare.

Kurt Bardella is a HuffPost columnist and the former spokesman and senior adviser for the House Oversight & Government Reform Committee. Follow him on Twitter: @kurtbardella

Millions in donations were sent for Kentucky tornado relief. Survivors wonder where the money is.

Yet most of the donations that Kentucky has set aside to help victims pay for unmet needs remain untapped, leaving survivors wondering if that help will ever come.

The Last of Us: HBO’s adaptation elevates the video game’s themes of love and family

The Conversation
Warning: This article contains spoilers.
From the widely panned Super Mario Bros. movie (1993) to Netflix’s Resident Evil (2022) releasing to decidedly mixed reviews, game adaptations have historically been cursed on both big and small screens.

HBO’s series based on the hugely successful PlayStation game The Last of Us, is the latest entry into this genre. Early indications from critics and viewers suggest it has broken the dreaded video game curse.

The series occupies a unique position. In 2013, when the game was released, post-apocalypses were incredibly popular science fiction worlds. In 2023, such pandemics, as we’ve discovered, hue closer to science fact.