Draining the swamp: Here's how the Democrats should run against Washington corruption 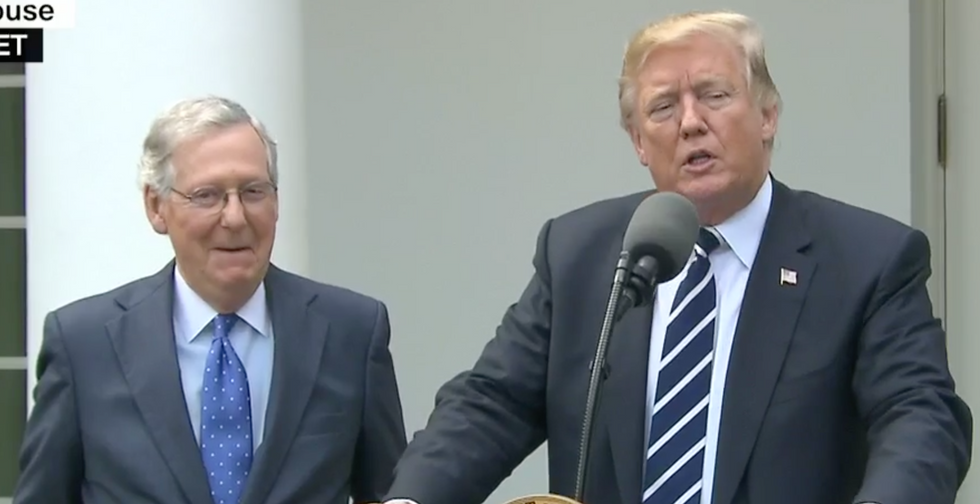 When Donald Trump was a presidential candidate, he promised to “drain the swamp.” Evidently, that promise has not been kept. Washington’s “swamp” appears to be overflowing, evidenced by a recent news report that Republican Congressman Chris Collins, the first member of the U.S. House to back Trump for President, has been indicted on charges of insider trading. Democratic Minority Leader Nancy Pelosi responded to the news by claiming there is a “culture of corruption” in Washington. Pelosi and fellow Democrats had stressed that message in 2006 when they won back control of the House.

If Democrats are interested in hammering the anti-corruption message in 2018, they can find another example of the strategy’s effectiveness in the record of Republican efforts to win control of Congress in 1952. Republicans needed a winning issue that year, because Democrats had been the dominant party in Congress since the time of the Great Depression. The GOP’s fortunes had improved briefly in the 1946 congressional elections, but Democratic dominance quickly returned. Republicans were especially hopeful in 1952 because their presidential candidate was an enormously popular hero of World War II, Dwight D. Eisenhower. Nevertheless, GOP candidates for the House and Senate needed an issue that could excite voter resistance to Democrats. In 1952 they discovered a fruitful point of attack associated with scandals. Drawing attention to ethical challenges facing officials in the Democratic administration of President Harry Truman, Republicans promised to clean up the “mess in Washington.” That pledge helped the GOP achieve majority rule in both houses of Congress.

Republicans focused much of their criticism on Harry Vaughan, a close associate of President Truman. Vaughan had sought favors from businessmen. Among the gifts he received were seven freezers. Vaughan gave one of the appliances to President Truman’s wife, Bess. Democratic Senator J. William Fulbright headed an investigation of Vaughan’s activities that also uncovered ethical and legal problems in the Reconstruction Finance Corporation, the Internal Revenue Service, and the Tax Division of the Justice Department. Republicans cited this information frequently and hinted, often without compelling evidence, that top administration officials and the president were directly involved in each scandal. “Plunder at home; Blunder abroad,” Republicans exclaimed, pointing to sleaze in Washington and the Truman administration’s difficulties fighting communism (subversion at home, the “loss” of China, and frustrations related to the Korean War).

This year Democrats can easily make a case against “plunder at home” in the run up to the 2018 elections. Reports about ethical problems involving top officials in President Donald Trump’s administration have punctuated the headlines. Rob Porter, the White House staff secretary, had to step down after two ex-wives accused him of domestic abuse. Ronny Jackson, the president’s personal physician, turned down his nomination to lead the Department of Veterans Affairs when questions arose about his workplace behavior. Scott Pruitt, the EPA administrator, had a sound-proof booth installed in his office at a cost of $43,000. Related scandals involved the purchase of a dining room set for the office of Housing and Urban Development Secretary Ben Carson at a cost of $31,000. $341,000 was wasted on expensive travel arrangements for Health and Human Services Secretary Tom Price. Commerce Secretary Wilbur Ross may have surpassed these officials in the size of charges against him. Ross is facing allegations about improprieties that sparked lawsuits, reimbursements, and an SEC fine. Forbes claims these allegations “come to more than $120 million.”

Far more serious are charges that individuals associated with the Trump administration may have engaged in criminal activities or conspired with America’s foreign adversaries. The president’s former national security adviser, Michael Flynn is cooperating with special counsel Robert Mueller after pleading guilty to lying to the FBI. Trump’s former campaign manager, Paul Manafort, has been charged with financial fraud. Special counsel Robert Mueller and his team of investigators are looking into the possibility that President Trump’s associates, members of Trump’s extended family, and possibly the president, as well, dealt inappropriately with the Russians or attempted to obstruct justice.

There are always stories circulating about corruption in Washington, but occasionally so many reports appear in the news that leaders of a minority party find opportunities to turn sleaze into a major election issue. Republicans eagerly pointed to the Truman administration’s ethical and legal problems during the 1952 election campaign, aiding their fight to win control of Congress. Democrats weaponized the issue in 2006. This year Democrats think an attack on the “culture of corruption” can work again. The tactic may improve their prospects for taking back the House. Perhaps a focus on scandals can also energize the Democrats’ more difficult battle to secure majority control in the Senate.