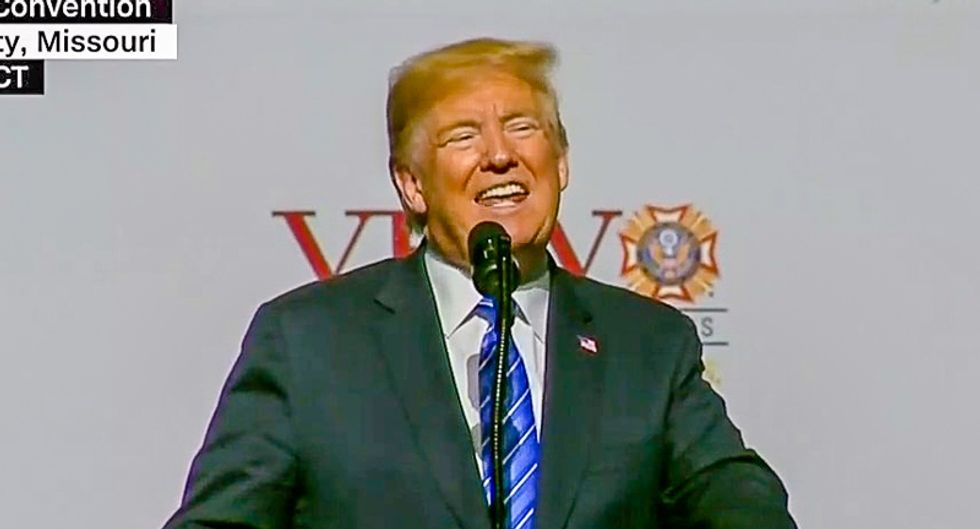 In late July, Trump administration officials bragged about the 4.1% growth in GDP seen in the second quarter of 2018.

"We're going to go a lot higher than these numbers, and these are great numbers," President Donald Trump said.

But progressive economist Dean Baker points out that the boost in GDP is hardly unprecedented and that we saw similar—and much higher—numbers during previous administrations. Beyond that, Baker broke down the numbers and determined that the single digit growth is hardly the economic windfall promised by the President and Republicans when they passed their tax bill.

"Trump’s tax cuts did provide some boost to growth as the rich people who got the money spent much of it," Baker observes. "The left-of-center economists who opposed the tax cuts didn’t doubt that rich people could spend money, we argued that there were better things to do with $1.5 trillion than to give still more money to the richest people in the country."

The economic growth seemingly spurred by Trump administration policies doesn't seem to be strongly impacting the lives of working people, Baker notes. "They argued that the tax cut would lead to higher pay for the country’s workers. We clearly are not seeing any acceleration in pay growth to date, with the rate of wage growth just keeping pace with inflation. But the story of the tax cut was not supposed to be one of short-term pay rises."

As far as increased investment (which is supposed to eventually trickle down as wages increases) Baker does admit that we've seen a boost in some sectors, primarily energy industries like oil and gas drilling. But, Baker argues, that can probably be explained by the rise in world energy prices.

"In short, we are seeing no serious evidence of the sort of investment boom promised by the proponents of the Trump tax cut," he concludes. "It still looks like the vast majority of the tax cut will go into the pockets of the very rich. And, in Donald Trump’s US, that is hardly amazing."