Ex-Roger Stone colleague: Jullian Assange is ready to talk -- but only if it's not a trap 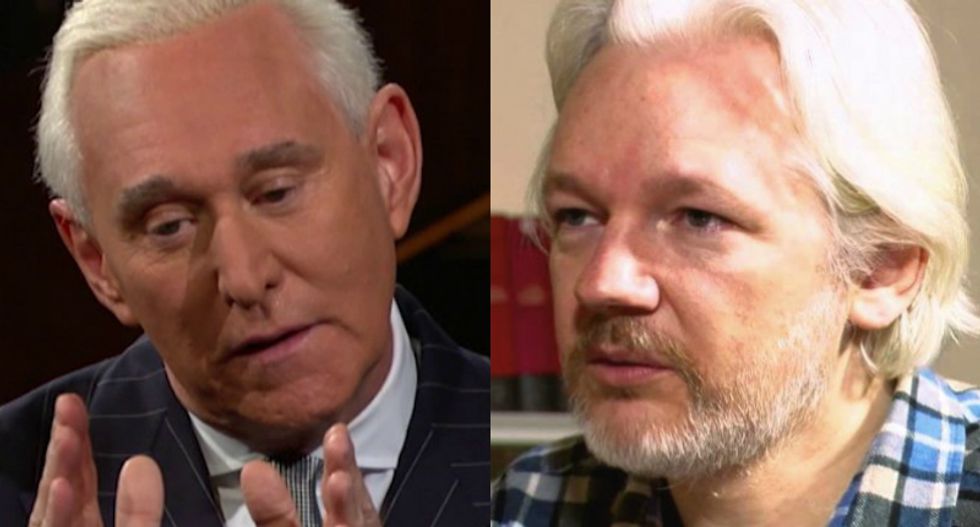 In a bizarre interview with MSNBC's Ari Melber, former Roger Stone campaign colleague Randy Credico revealed that Julian Assange would be willing to speak to investigators.

Credico argued with Melber over the facts of the Russia investigation and the hack, claiming that there weren't 17 intelligence agencies deciding anything. The host began to interrupt, but Credico talked over him.

"Well, I'm showing you the evidence," Melber said reading from the indictment.

"Right. Well, that's not the evidence, that's something that [Robert] Mueller put out there and his investigators," Credico claimed. "We don't know for sure where it really came from. You can say 17 -- it's not 17 intelligence community organizations that have signed off on this. That's not true. There's three or four, that's all."

Melber explained that Credico was conflating the 17 intelligence agencies that corroborated Russia meddled in the 2016 election with the indictment papers.

"You're on a thin read if your problem is how they bureaucratically organize it," Melber explained.

Credico claimed that it was all fake because "they" were wrong about weapons of mass destruction in Iraq.

"For viewers watching you and assessing you, you are someone who has been dubious and skeptical of government assertions," Melber continued. "And sure, I think the Iraq war is one that comes up a lot on the left and the right. Donald Trump cites it. I think we all know the differences and we're not going to reopen it right now."

Credico went on to say that Mueller did call on him to testify. It was a voluntary request, which his attornies urged him not to do. He revealed that it was an investigator who asked if he would testify, not Mueller. He refused to say "where" they found him, however, because "I'm kind of elusive these days. There are people out there saying bad things about me."

Melber tried to clarify the story, and Credico was bothered by the characterization of him being an "associate" with Stone. Instead, he insisted they'd "worked together on a few campaigns." He also said he wouldn't call Stone a colleague, but he's known Stone for 16 years.