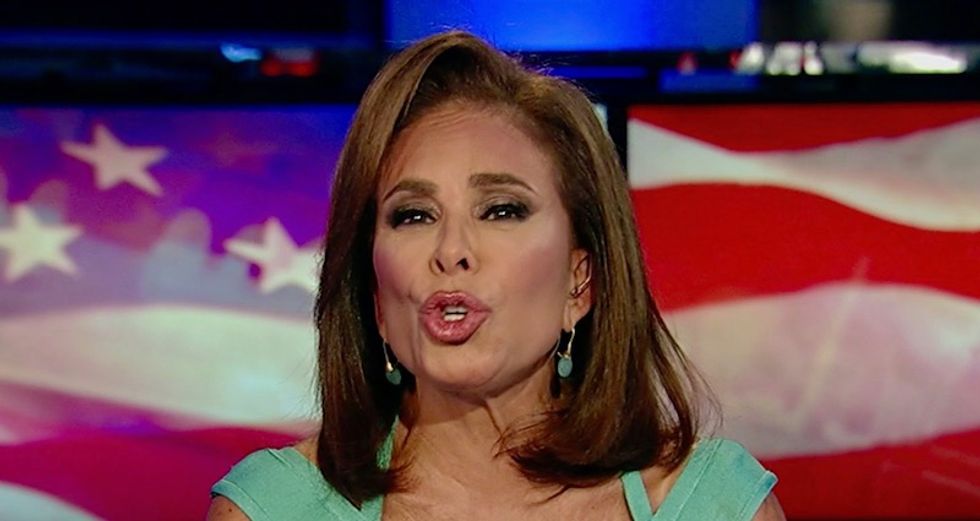 On her Saturday night show, Fox News host Jeanine Pirro introduced a bonkers new theory about special prosecutor Bob Mueller being a criminal who took pay-offs from a Russian oligarch and who will soon need his own attorney.

"Bob, I really think it's time to give up your phony investigation and get yourself your own criminal defense attorney," Pirro said.

Pirro's monologue began with her normal talking points, such as claiming that the Mueller investigation, which has already led to a bevy of criminal charges against people close to Trump, was a fraud.

"Are you using the Christopher Steele fake dossier as the basis of your investigation?" Pirro asked, apparently forgetting about the emails in which Donald Trump Jr. discussed getting "dirt" on Hillary Clinton through a Kremlin spy.

Things really spiraled out of control once Pirro started discussing a Russian oligarch named Oleg Deripaska who the FBI allegedly approached about funding some sort of operation. Right-wing media has suggested that Christopher Steele was "advocating" for the oligarch who has a complex relationship with Russian dictator Vladimir Putin.

"Why would you ask for millions of dollars from a Russian oligarch banned from the United States to fund an FBI operation?" she said. "Should you have even asked the oligarch for tens of millions of dollars and for his services. Because that's a crime, isn't it Bob? I'm sure you know the anti-deficiency act prohibits you, as a government agency, from accepting voluntary services. and if it came out that you took money, Bob, from a Russian oligarch whose name you intentionally left out of Manafort's indictment, that would be an embarrassment, wouldn't it?"

It was unclear what Pirro was talking about during the bonkers rant.