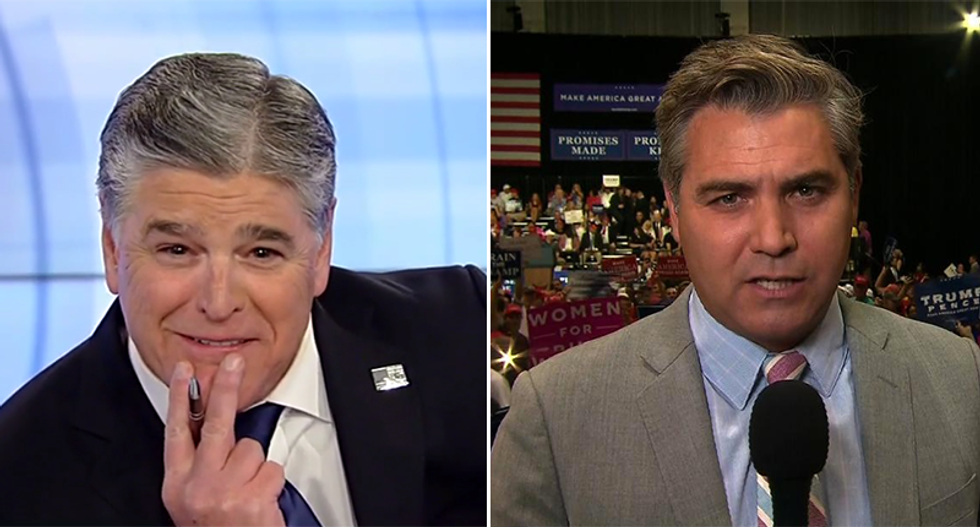 Fox News host Sean Hannity went on a cursing Twitter rant at Jim Acosta, after the CNN reporter blamed Fox News for "whipping" Trump supporters "into a frenzy" at the media.

“Honestly, it felt like we weren’t in America anymore,” Acosta said. “I don’t know how to put it any more plainly than that. Americans should not be treating their fellow Americans in this way.”

He went on to blame Fox News hosts and Trump himself for the anti-CNN sentiment.

“My sense of it is that these opinions these folks have at these rallies, they’re shaped by what they see in the primetime hours of Fox News and what they hear from some conservative news outlets that just sort of give them this daily diet of what they consider to be terrible things we do over here at CNN,” Acosta said.

Hannity responded with a tirade of his own.

"Sorry your precious feelings are hurt & that people see through your lying bullsh*t for what it is. FAKE NEWS," Hannity tweeted, along with a #CNNSucks hashtag.

It's unclear if Hannity is calling Acosta's video of the Trump supporters "fake news" or Acosta's commentary about it "fake news." He didn't clarify.