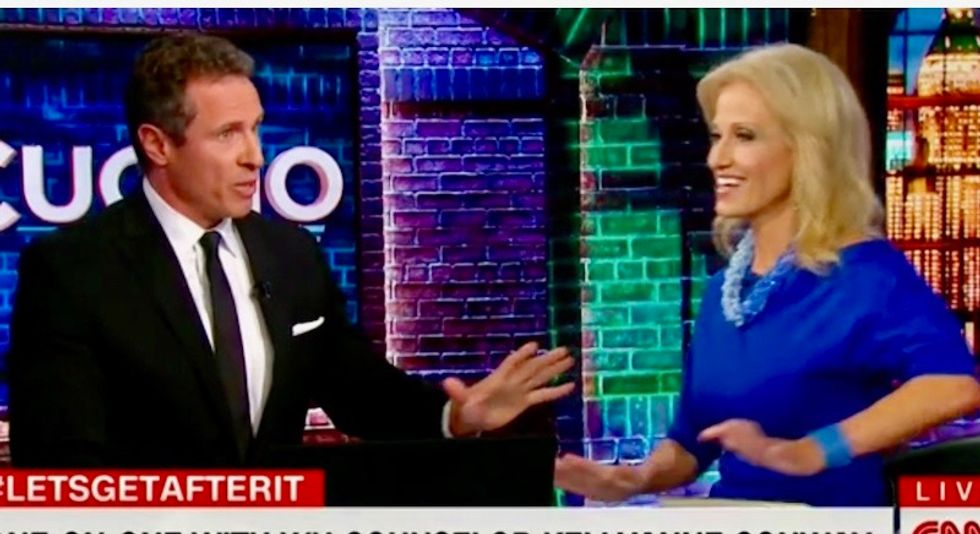 Conway argued that President Trump is not a liar and echoed that CNN is out to get the president and consistently "feeds viewers" negative information about the president.

Cuomo asked if President Trump knew about the payments made to an adult film star, and Conway dodged answering.

Cuomo did not allow Conway to spread any more lies. Cuomo told her to "Go back to Fox," if she wanted to spread lies about the president on air.

At the end of the interview, a clearly uncomfortable Conway tried to walk off the set before the network cut to commercial and Cuomo had to ask Conway to sit still.

These MAGA 'antagonists' have major plans for the House Rules Committee: report

In order to be chosen as House speaker and win over far-right MAGA holdouts, Rep. Kevin McCarthy of California had to make a lot of promises. And that includes giving choice committee assignments to the hardliners in his caucus.

Journalist Emily Brooks, in an article published by The Hill on January 30, takes a look at three of those lawmakers.

Thom Hartmann
The Manchurian Candidate was apparently more than just a movie.

A Russian agent in the employ of one of Putin’s oligarchs was paid millions to run Trump’s campaign and was passing secret campaign information to Russian intelligence that they used to target specific groups of American voters via Facebook and Twitter.

When this treachery was referred to the FBI, the lead agent there was later, it turns out according to The New York Times, also in the employ of Putin’s oligarchs.

MyPillow CEO Mike Lindell revealed that the Republican National Committee (RNC) has promised to allow him to run an "election crime unit" for the 2020 elections.

After getting only four votes for RNC chair, Lindell made a Monday morning appearance on Steve Bannon's War Room podcast.