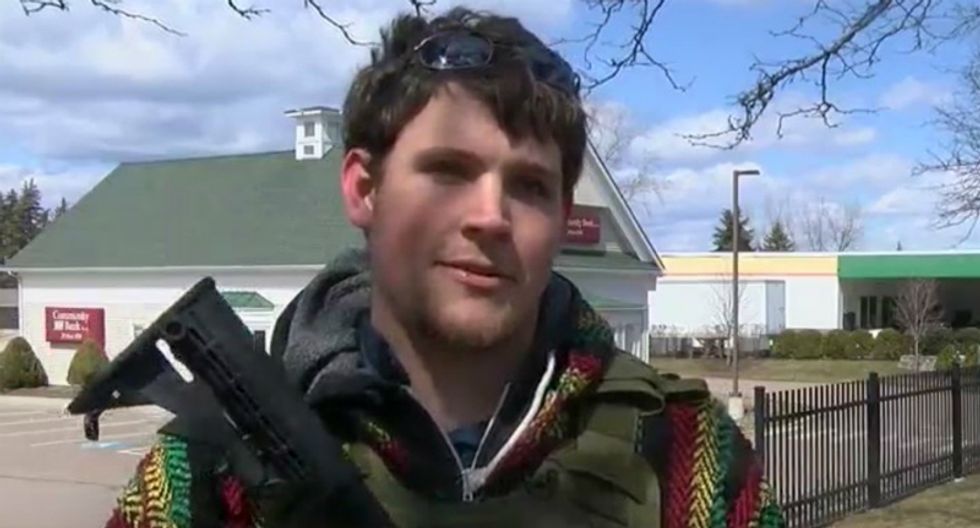 A Vermont man whose gun activism got him a write-up by Fox News has been arrested for pointing a gun at a black woman while yelling racial slurs — an act that got him charged with a hate crime.

The Burlington Free Press reported that 23-year-old Sheldon Rheaume, a resident of Essex, VT, was jailed without bond early Tuesday morning on charges of aggravated assault with a deadly weapon, reckless endangerment and hate-motivated disorderly conduct.

Police said that around 3:30 AM on Tuesday, Rheaume went into a gas station and began directing racial slurs at the woman seated behind the counter. He allegedly told her she was "lazy" and "needed to get to work" before going outside and using more slurs against her while complaining to the woman's coworker.

When the attendant exited the store, court papers claim, Rheaume took out a gun and said "I'll handle you" to her. According to the Free Press report, the woman told police that the man waved the gun around in front of her face and pointed it at her as well.

In 2017, Fox News picked up a story about Rheaume and other Vermont gun rights activist protesting laws limiting the sale of assault rifles in the state. In the story, the man was quoted about his decision to bring an AR-15 rifle to the rally held in the city of Burlington.

Rheaume was apprehended by police in the parking lot of a nearby grocery store, the report continued, while wearing a bulletproof vest and holding his handgun. According to court records, another employee at the gas station where he threatened a black woman heard him claim that he'd be "ready" for anyone who came to get him.

"Come send anyone you want after me," the gun activist said, "and I'll shoot them."