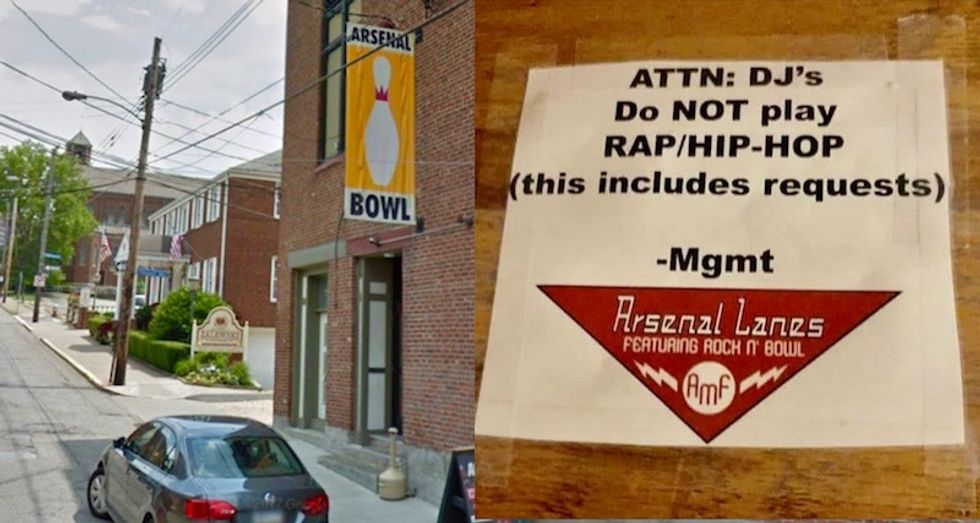 A hipster bowling alley in Pittsburgh is under fire after a DJ posted a photo of a sign instructing DJs to never play rap or hip-hop music, reports Pittsburgh City Paper.

The sign was posted behind the DJ booth and read, "ATTN: DJ's Do NOT play RAP/HIP-HOP (this includes requests) – Mgmt.”

The poster had the logo for the alley, Arsenal Bowl.

On social media, people have claimed that the DJ who posted the photo was fired, but City Pages was unable to confirm them. The paper talked to an employee who denied the authenticity of the photo, claiming “there’s a lot of things on Facebook that’s not true" and that "Somebody could have made up a picture."

The alley has been under fire with allegations of racism in response.

"Why didn’t I see classical polka jazz or disco on this list of music not to play since that’s no where near rock n roll man stop with the bs y’all already been deemed as a racist spot in Pittsburgh this is just concrete evidence," one commenter wrote.

Arsenal posted a message on Facebook that stopped short of apologizing.

"We generally focus on rock and roll music and closely related genres. We are looking into this specific situation now to confirm exactly what occurred, but moving forward, we’ll strive to ensure that any communication to DJs focuses on what the evening's bowling experience should include instead of exclude," the alley wrote.