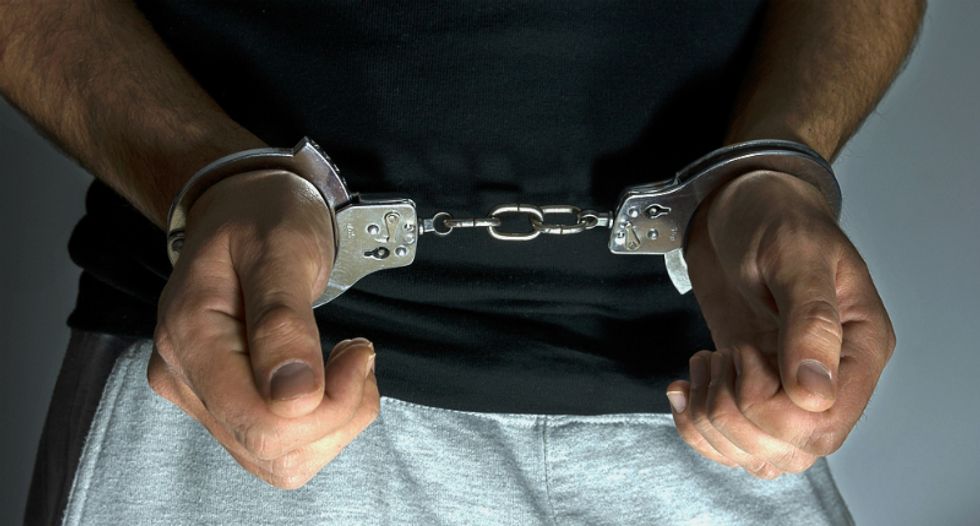 Close-up photo of a black man with handcuffs on his wrists. Image via Shutterstock.

A homeless black teen is suing police in Biscayne Park, Florida after the town's police chief admitted to framing him for multiple burglaries in order to clear the department's backlog and make it look like he'd "eradicated" crime in the village of 3,000.

The Miami New-Times reported that former Biscayne Park police chief Raimundo Atestiano admitted to framing the teen, identified in court records as "T.D.," for both burglaries and 22 traffic violations in 2013.

“If they have burglaries that are open cases that are not solved yet, if you see anybody black walking through our streets and they have somewhat of a record, arrest them so we can pin them for all the burglaries,” an officer named Anthony De La Torre said in an internal probe in 2014. “They were basically doing this to have a 100% clearance rate for the city.”

Now, T.D. is suing the former police chief, three officers involved in the false charges and the Village of Biscayne Park, "alleging that the group violated his civil rights and maliciously prosecuted him," the New-Times reported.

"The defendants were part of a conspiracy to satisfy the Village that crime was being eliminated," T.D.'s lawyers argued in their federal lawsuit.

In the indictment, Atestiano is accused of intentionally setting up T.D. for four burglaries that took place between April and May of 2013. Federal prosecutors claim the ex-chief did so because he "wanted to tell the town government that he'd solved every single burglary in town," which the report noted is "basically impossible to achieve."

Atestiano allegedly instructed two of the officers named in the suit to arrest T.D. in June of 2013 for the "unsolved burglaries knowing that there was no evidence and no lawful basis to support such charges," prosecutors claimed. The suit further alleged the officers then gathered evidence to make a case against him and "included a false narrative" to justify their phony affidavits.

The report noted that prosecutors dropped the charges against T.D. in 2013 "after the State Attorney's Office noticed that the police arrest affidavits sounded eerily similar, including multiple instances in which a 'rear door pried open' in exactly the same way at houses the homeless teenager was supposed to have burglarized."

Despite the charges being dropped, prosecutors argue that T.D. "was incarcerated and unable to get a license" due to the violation of his civil rights by the Biscayne Park chief and officers.