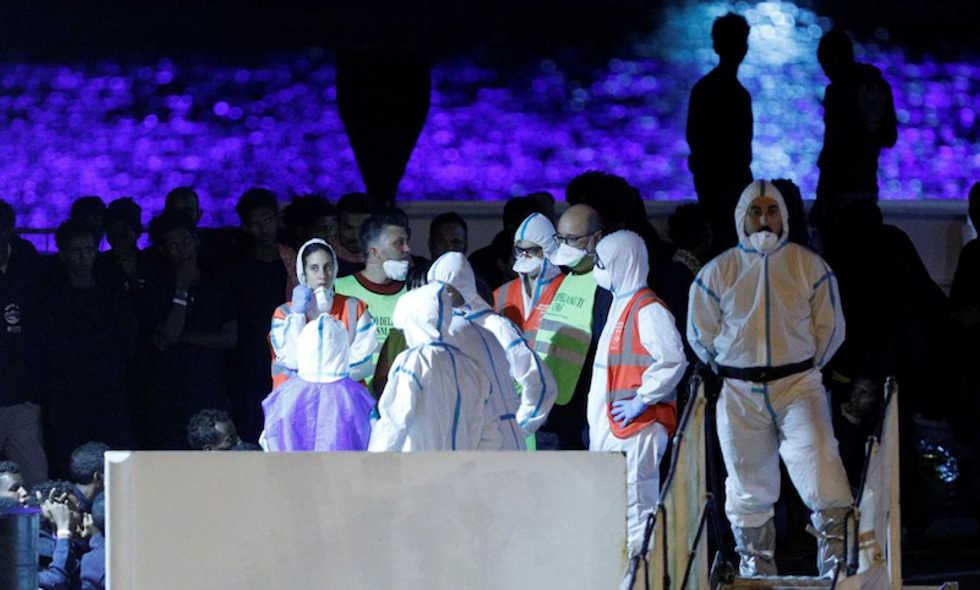 Italy on Saturday began disembarking 150 migrants from a rescue ship that had been docked for five days in a Sicilian port, ending the migrants’ ordeal and a bitter stand-off between Rome’s anti-establishment government and its European Union partners.

The migrants, mainly from Eritrea, had been stranded in the port of Catania since Monday because the government refused to let them off the boat until other EU states agreed to take some of them in.

Interior Minister Matteo Salvini said Albania had offered to accept 20 of the migrants and Ireland 20-25, while the rest would be housed by Italy’s Catholic Church “at zero cost” to the Italian taxpayer.

“The church has opened its heart and opened its wallet,” Salvini, from the right-wing League party, told supporters at a rally in Pinzolo in northern Italy.

Salvini, who has led a popular crackdown against immigration since the government took office in June, also announced that he had been placed under investigation by a Sicilian prosecutor for abuse of office, kidnapping and illegal arrest.

“Being investigated for defending the rights of Italians is a disgrace,” he said.

Earlier on Saturday, the United Nations called for reason from all sides after a meeting of envoys from 10 EU states in Brussels a day earlier failed to break the deadlock.

“Frightened people who may be in need of international protection should not be caught in the maelstrom of politics,” the U.N. refugee agency UNHCR said in a statement.

The agency appealed to EU member states to “urgently” offer relocation places to the rescued people, in line with an agreement at an EU summit in June, and in the meantime, urged Italy to allow “the immediate disembarkation of those on board.”

Rome had refused to back down, despite criticism from rights groups and the opposition, with Salvini saying he considered the attacks he received to be a “badge of honor.”

The only help from within the bloc came late on Saturday from Ireland, whose offer to take in 20-25 migrants followed a pledge from non-EU member Albania to take in 20.

Prime Minister Giuseppe Conte attacked the EU for its lack of support and said Italy may refuse to back the bloc’s multiyear budget currently under discussion.

He said on Facebook that Friday’s meeting in Brussels had been “a defeat for Europe”, and “a clear violation of the spirit of solidarity” that should be a founding principle of the Union.

Before the breakthrough late on Saturday, thirteen migrants - seven women and six men - were ordered off the boat by doctors after a check-up carried out at around midday.

They finally left the boat one-by-one some six hours later, stepping down a flight of steps to touch dry land for the first time since leaving Libya at least 10 days ago. The 13 were taken by ambulance to Catania’s Garibaldi hospital.

Italian media reported that among them there were three cases of suspected tuberculosis and two of suspected pneumonia. Medical officials on the spot did not confirm this.

The Interior Ministry said the remaining migrants will disembark during the night and be taken to a reception center in the Sicilian city of Messina, before being distributed to the Church dioceses as well as Ireland and Albania.

More than 650,000 people have reached Italian shores since 2014, and even though the numbers have fallen steeply in the last year, Rome says it will not let any more rescue ships dock unless the migrants are shared out around the EU.

“The next ship can turn around and go back where it came from because our limit has been reached,” Salvini said.

Earlier this week, Italy let 27 unaccompanied minors leave the vessel. Prior to that, another 13 people needing urgent hospital attention were evacuated.

During their five days docked at Catania, the mostly young men on board sheltered from the sun under a large green tarpaulin that covered around half the deck, with clothes hanging attached to it to dry. Some occasionally waved to reporters gathered on the quayside.

Around 200 protesters gathered at the port on Saturday, some waving left-wing flags, calling for the migrants to be allowed off. They later skirmished with police.

Meanwhile in Rome, prosecutor Luigi Patronaggio questioned several Interior Ministry officials as part of his criminal investigation over the migrants being held against their will.

At that time, the investigation was said to be against “unknown persons”, but Salvini said he was responsible for his ministry’s actions, challenging the prosecutor to arrest him.

The 5-Star Movement, the League’s coalition partner, has so far backed Salvini’s hard line, and its Transport Minister Danilo Toninelli, who is responsible for the country’s ports, on Saturday renewed the government’s attacks on the EU.

“Nobody can give lessons to Italy on its humanitarian efforts”, he said. “The government is only asking the EU give some sense to its own existence.”