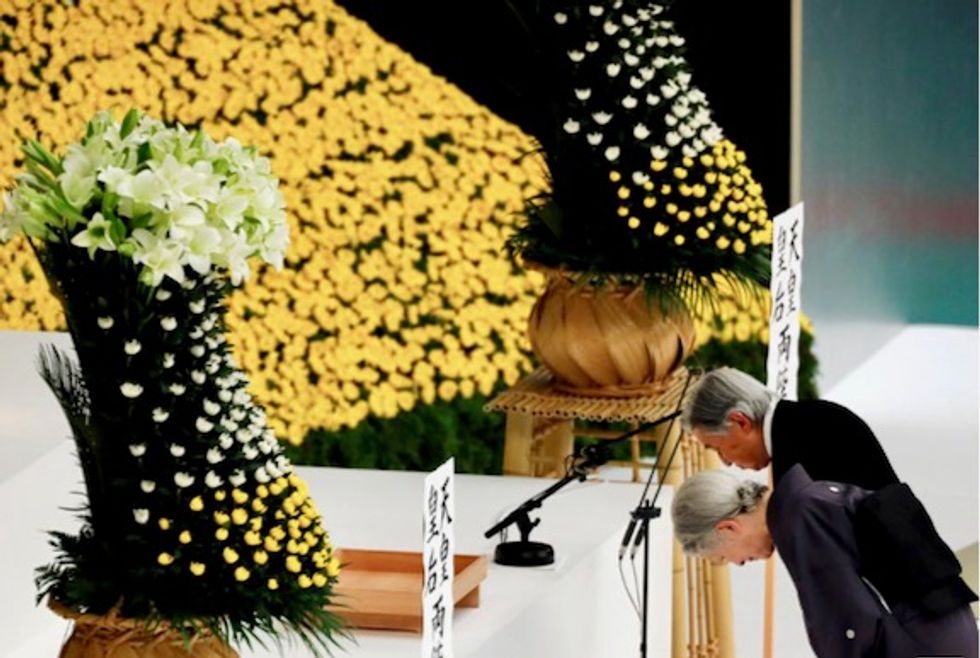 Japan's Emperor Akihito and Empress Michiko bow at an altar during a moment of silence to the war dead at a memorial ceremony marking the the 73rd anniversary of Japan's surrender in World War Two, at Budokan Hall in Tokyo, Japan August 15, 2018. REUTERS/Toru Hanai

Earlier on Wednesday, Abe sent a ritual offering to Tokyo’s controversial Yasukuni Shrine for war dead but did not visit out of apparent consideration for ties with Seoul and Beijing.

Past visits by Japanese leaders to Yasukuni have outraged China and South Korea because the shrine honors 14 Japanese wartime leaders convicted as war criminals by an Allied tribunal, along with war dead.

China’s relations with Japan have long been haunted by what Beijing sees as Tokyo’s failure to atone for its occupation of parts of China before and during World War Two, although ties have thawed recently. Japan occupied Korea from 1910-1945 and bitter memories still rankle.

A silver-haired Akihito, 84, who will abdicate next year, spoke at the memorial for war dead after a moment of silence.

“Thinking of the peaceful times that have extended for many years after the war, reflecting on our past and with a feeling of deep remorse, I earnestly hope that the ravages of war will never be repeated,” said Akihito, wearing morning dress and accompanied by a kimono-clad Empress Michiko.

Akihito has carved out a role as a symbol of peace, democracy and reconciliation during his three decades on the throne, visiting wartime battlefields to pray for war dead of all nationalities.

His remarks on Wednesday echoed those he first spoke on the 70th anniversary of the war’s end, in a subtle departure from previous comments that were seen by many liberals and moderate conservatives as a subtle rebuke to Abe.

Abe has said future generations of Japanese should not have to keep apologizing for the conflict.

“I will humbly face the past and resolutely uphold this promise,” the prime minister said on Wednesday.

In Beijing, the foreign ministry said, “The Yasukuni Shrine enshrines Class A war criminals who were directly responsible for the war of aggression.

“We firmly oppose the wrong practices of the Japanese side,” the ministry said in a statement.

Separately, a group of about 50 conservative Japanese lawmakers including Shinjiro Koizumi, the popular son of former prime minister Junichiro Koizumi who is often spoken of as a future premier, paid their respects at Yasukuni.

Ruling Liberal Democratic Party lawmaker Masahiko Shibayama, who made the offering at Yasukuni on Abe’s behalf, said the prime minister asked him to pray for the souls of the departed and that Abe regretted being unable to pay his respects in person.

Abe has only visited the shrine in person once since taking office in 2012. His December 2013 visit angered China and South Korea and prompted an expression of disappointment from ally the United States. Since then, he has sent offerings on Aug. 15 and Yasukuni’s twice-yearly festivals.

Akihito’s father, Emperor Hirohito, in whose name Japanese fought World War Two, stopped visiting Yasukuni after the wartime leaders were first honored by the shrine in 1978, and Akihito does not pay his respects there.