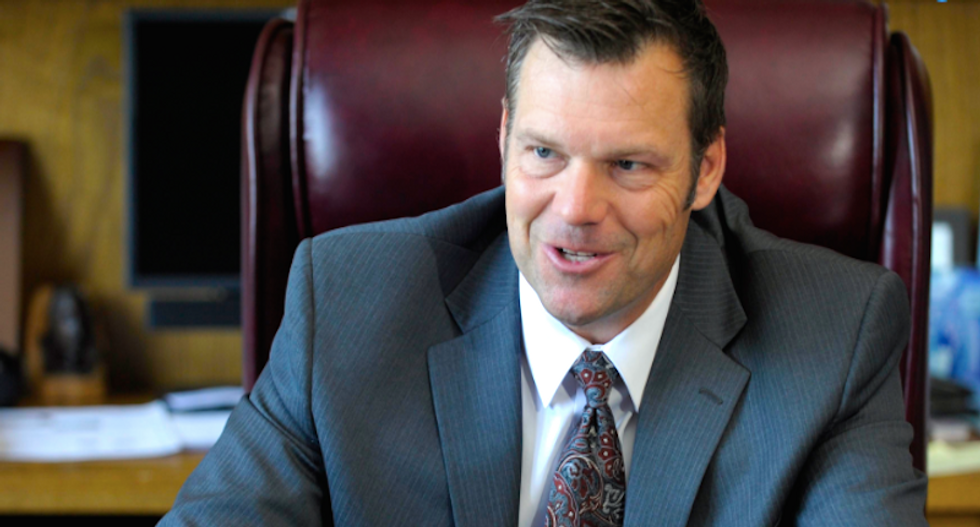 Kansas gubernatorial candidate Kris Kobach, who is currently serving as secretary of state, has the legal right to oversee the recount of his own election result, legal experts say.

On Tuesday, Kobach narrowly came out ahead of Gov. Jeff Colyer (R) by only 191 votes in the Republican primary for the governor's race.

According to The Kansas City Star, there is no law preventing Kobach from overseeing a near-certain recount because he holds the office of secretary of state.

“There’s nothing in the statute that says the secretary has to recuse himself,” election lawyer Mark Johnson told the Star. “But I would have to believe that in a situation like this, the secretary would be well advised to remove any appearance of impropriety.”

“Go back and look at the pictures of the Florida recount,” he added. “It may look like that.”

Rep. John Carmichael (D-KS) agreed that there is no legal maneuver Colyer can use to prevent Kobach from running the recount.

"My opinion is the recusal argument is a political argument as opposed to a legal argument,” Carmichael explained. “He is the state’s chief election officer and there’s an inherent conflict of interest in that, but that’s the way the statute is written.”

Carmichael argued "fairness would dictate" that Kobach recuse himself.

University of California election law expert Rick Hasen told the paper that "it would be good practice even if not required by state law for an election official to recuse from any recount or legal proceedings surrounding his or her own election efforts."

Hasen noted that the issue "only arises because we have partisan election officials running our elections. In most other advanced democracies, there are nonpartisan professionals.”