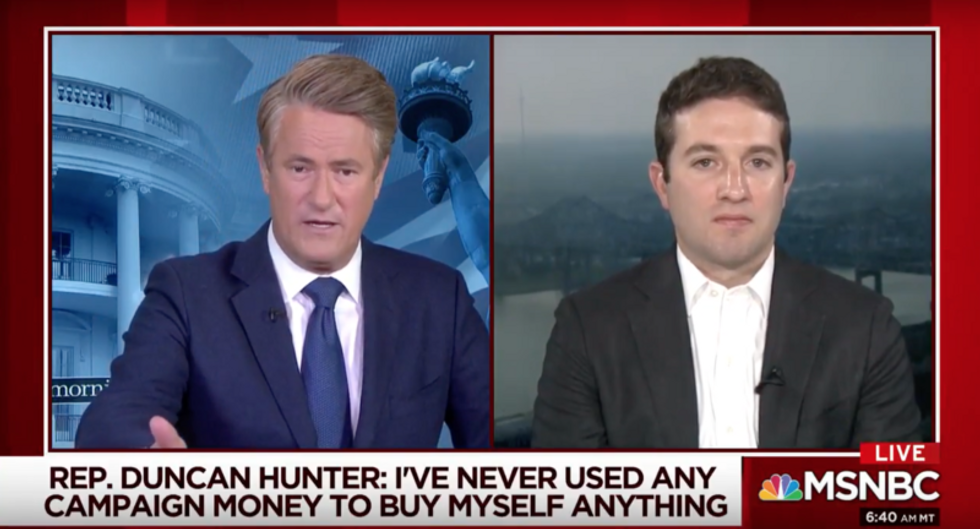 Politico's Jake Sherman and a panel of reporters on MSNBC's "Morning Joe" had a good time mocking Representative Duncan Hunter Jr. for blaming his campaign finance and conspiracy indictment on his wife.

"About three or four years ago, I noticed Duncan Hunter was spending a lot of money on strange things," Sherman revealed. "I went to his office and I let them talk me out of writing that story. So we saw this at Politico a long time ago and we're not proud of it because we got talked out of writing the story."

Admitting that the United States' campaign finance system "is really broken," Sherman and the rest of the panel couldn't help but laugh at the sheer magnitude of Hunter's abuses. "I've never seen the kind of money that Duncan Hunter spent. It's well outside the bounds," Sherman chuckled, describing the congressman's lavish expenses, which included a trip to Italy. "He's not at this point saying what happened or giving any excuse besides throwing his wife under the bus."

But it was Hunter's now-notorious attempt to use the Navy cover up that trip, which culminated in the congressman saying “tell the Navy to go f--- themselves", that tickled Scarborough's funny bone. "When the Navy wouldn't take that meeting, he had some, er, unkind words," the host laughed.