MSNBC's Rachel Maddow details how Manafort's trial connects to the Russia probe: 'Something important is about to happen' 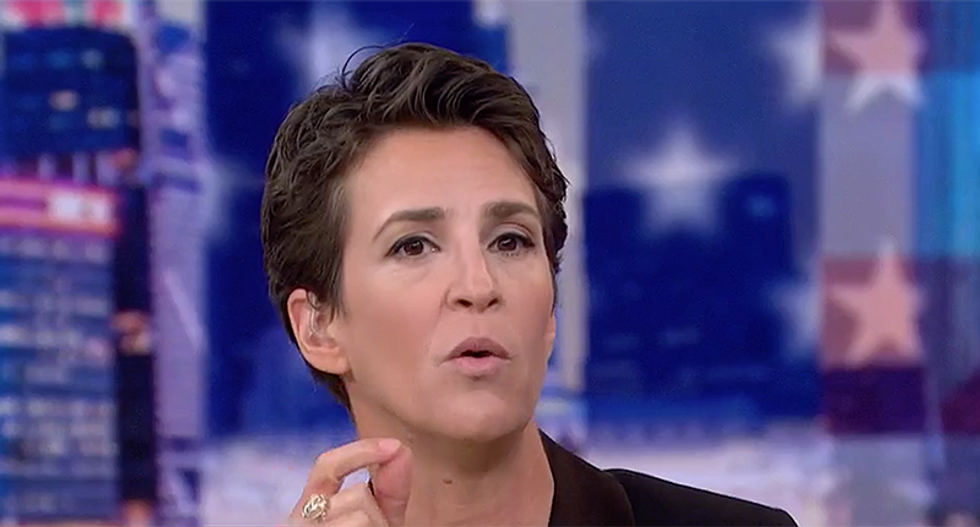 When Judge T.S. Ellis began Paul Manafort's trial, he made the prosecution agree that the trial would have little to nothing to do with the 2016 Trump campaign. But during her Tuesday night show, MSNBC’s Rachel Maddow pieced together the ways many of Manafort’s transactions seem to be finding their way back to President Donald Trump.

It was common knowledge, the host pointed out, that Paul Manafort was paid handsomely by former Ukrainian Viktor Yanukovych. But the testimony of the former campaign chairman's associate Rick Gates revealed that the ex-Ukrainian leader also paid Manafort 4 million euros to manage his policies — policies that Maddow noted soon veered away from the European Union and directly towards Russia.

"The reason Yanukovych was thrown out of office in a popular uprising of the Ukrainian people is because once he was in office, he turned hard-line away from the EU and toward Moscow," the host said. "Apparently, while we just learned today, Paul Manafort was being paid 4 million [euros] a year to advise him on how he should govern."

Maddow shared an anecdote from David Corn and Michael Isikoff's book "Russian Roulette" in which a State Department official, upon learning Manafort was running the campaign for the Republican presidential nominee, thought "Manafort? He's been a Russian stooge for 15 years!"

She went on to outline a number of other strange happenings — like how the day Manafort quit the Trump campaign, he also opened an LLC that soon borrowed $16 million from a tiny Chicago bank meant for veterans. That same bank and those same loans bizarrely ended up in both a Chicago divorce settlement and an email that mentioned him sent from Gates to Manafort in late November 2016.

As Maddow explained, previous reporting revealed that a man named Steven Calk was seeking the position of Secretary of the Army. Loans from the small Chicago bank that loaned Manafort's LLC appeared in Calk's divorce settlement — and an email introduced as evidence on the stand today revealed that long after Manafort left the campaign, he emailed Gates about the same man.

That email, the host said, showed "the Trump campaign apparently selling this would-be job offer to run the Army."

Maddow explained how all of the pieces finally came together today while Gates took the stand. But one moment caught her by surprise.

The MSNBC host read a transcript of an exchange where a defense attorney asked if Gates had been questioned by other investigators about the Trump campaign. Gates said he was. Prosecutors objected to the line of questioning and the judge asked that the lawyers approach the bench.

The conversation with the judge that followed fell between pages 1399 and 1425 of the transcript of the trial. It's noted that those pages are now "filed under seal."

"Six pages sealed and we're not allowed to see what happened next," Maddow noted. "The judge brings the lawyers to discuss it without the jury hearing. It does not end up in the transcript and we don't know what happened. Then they adjourn for a long recess thereafter."

There are several parts of the Manafort case that harken back to the Trump campaign, despite the judge's decision to distance the line of questioning, Maddow explained.

"Why are they then also objecting to any further discussion about the Trump Campaign during the trial?" she closed with the question. "But something important is about to happen."