'We're in a permanent carnival': Seth Meyers explains why he longs for the days when it was only about Trump lying 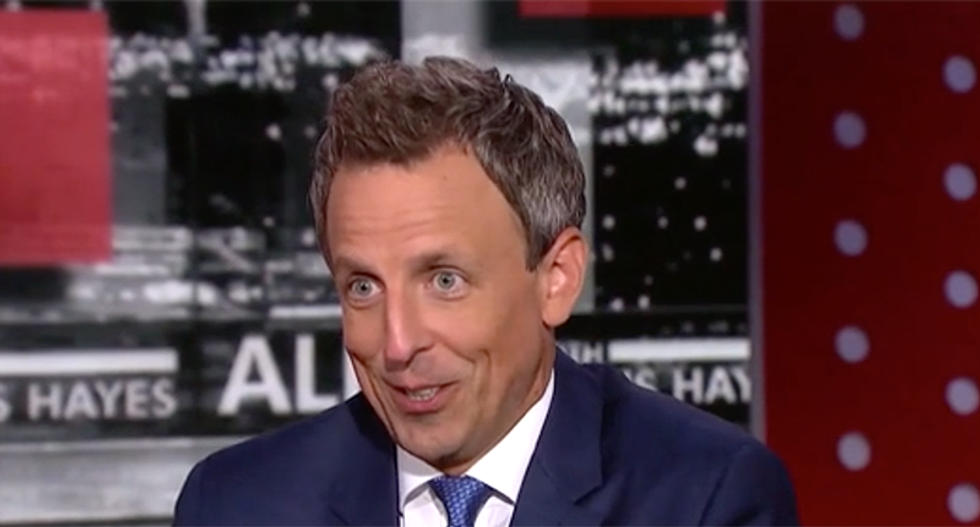 Late Night host Seth Meyers told MSNBC's Chris Hayes that he continues to be shocked by the ways in which President Donald Trump's scandals manage to one-up themselves.

"That is the other part of this is, when we watch people in this orbit commit crimes, it has not been incredibly sneaky stuff," Hayes said. "It has been in broad daylight activity."

"It's never that scene from a movie where the detective has yarn going a hundred deferent ways," Meyers agreed. "It is just one piece of yarn."

"And you get Rick Gates on the stand, that was an amazing moment. 'We did crimes together,'" Hayes said quoting Gates.

Meyers said that there's something "really sweet" about describing it in that way. It reminded him of Bonnie and Clyde, "they did crimes together."

Meyers also noted that his nightly show has begun doing a "check-in" segment, where they will describe what is happening while Americans were glued to their televisions over the scandal de jour.

He also explained that it seemed all of the late-night shows discovered Americans wanted to hear political comedy at the same time and pivoted their shows to do exactly that.

"From my time at SNL, especially a presidential election where there is no incumbent. You have big fields on both sides, and there are fun things to write about. Som that started for all of us. And you know, that was the carnival that we all thought would eventually leave town, like carnivals do. We're a permanent carnival. We learn during the campaign how to get ready for this."

Meyers noted that there are serious subjects that the team simply can't make jokes about. Family separation isn't funny, but the challenge is finding ways to make fun of those hurting families.

"It always feels like it is getter more intense," Hayes said. "I have this signal with the staff, banning adverbs. Like, 'Donald Trump is growing increasingly,' well it's been increasing for months. Do you have that feeling that we are hurtling towards something?"

"Like you say, that has also been this feeling from the beginning of hurtling. We did a 'Closer Look' about him fudging the facts on the Carrier air-conditioning," Meyers remembered. "That was a thing that seemed like a real thing."

Now, something as simple as that is the "dream," he described.