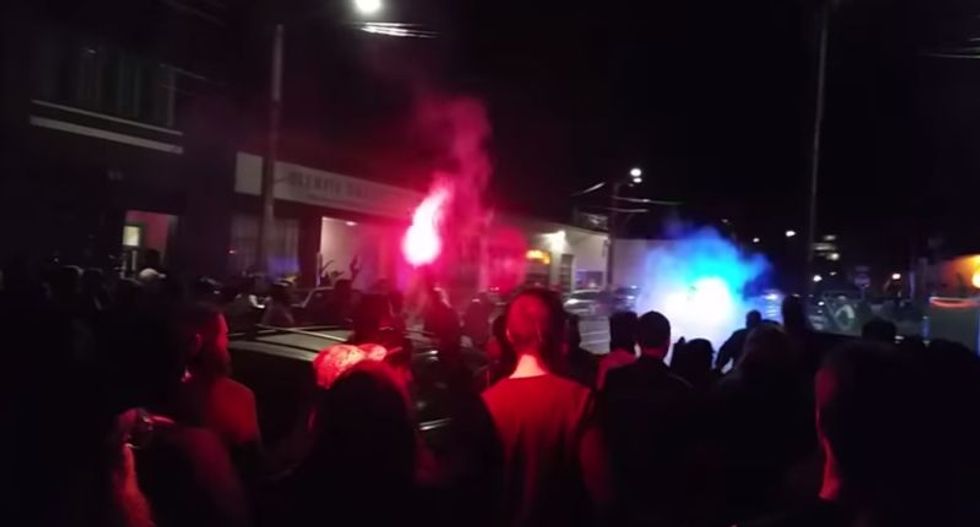 On Monday, the Washington Post reported on the rise of right-wing Hindu nationalist groups of men who've escalated their online social media screeds into real-world violence.

“Even if a life is lost, we don’t care,” Ram Kumar, 23, told the Post. The men spend their time online, doing military drills and attacking interfaith couples or people who they think are Muslim. Dozens of people have been killed in India's "summer of rage."

The right-wing nationalists seem to have been emboldened by the ruling Hindu nationalist party, Bharatiya Janata Party (BJP) and Prime Minister Narendra Modi. Undergirding the violence are the demographic realities that India's men outnumber women and their economic prospects are bleak, making it unlikely that they will settle into marriage.

Thanks to India's preference for male offspring, the country has 37 million more men than women, and many of these men are unlikely to marry—or even have sex very often. In India and China, where sex-selective child practices have also created a massive gender imbalance, 50 million of the excess males are under age 20.

The Hindu nationalists interviewed by the Post seemed to oscillate between wanting to control women's behavior (such as enforcing strict codes of female modesty and attacking interfaith couples) and rejecting the idea of traditional relationships with women.

"There is a saying, ‘Behind every successful man is a woman’? But you don’t need women. You can leave them behind and achieve success in life,” the man said.

In many ways, the crisis in India is specific to the region. But enraged young men whose unhealthy social media use is spilling into the streets appears to be a global problem.

This year's Unite the Right rally in Washington D.C. was a flop for the alt-right—reporters outnumbered White supremacists. A few days later, organizer Jason Kessler's humiliation was complete when his livestream about sex trafficking and Jews got interrupted by his own dad yelling at him to get out of his room.

Nevertheless, Pacific Standard reports that although it looks as though the alt-right has retreated, they're regrouping in alternative online organizing forums and starting to use encrypted apps like Signal and WhatsApp. The organizing comes on top of real-life paramilitary training.

"In 2017, neo-Nazi and affiliated militia groups went through specialty military training in rural parts of America," the authors note. "With expertise flown in from places like Germany and Scandinavia, where neo-Nazi activities date back at least to the 1970s, they discussed the new political environment frothing in countries from Austria to the United States on account of an insurgent alt-right. They wore fatigues, practiced shooting and mob control, and generally bonded through their shared experiences, values, and worldviews."

They note that the groups adeptly propagandize and recruit online. After Charlottesville, they were kicked off of many mainstream platforms, but have merely migrated to so-called 'alt-tech' tools.

Meanwhile, Germany is experiencing full-on violent racist riots after a German man was stabbed, allegedly by immigrants. Thousands of protesters jammed the streets of the German city of Chemnitz, many brandishing the insignia of the far-right AfD and neo-Nazi NPD parties, the Agence France-Presse reports. Men vastly outnumber women in the AfD and most of the rioters were men.

"We are louder, we are more" and "lying press," they shouted, according to the UK Standard.

According to the Standard, Syrian and Afghani teens were attacked and a 30-year-old Bulgarian was threatened.

Like the rioters in India and the would-be rioters in the US, they're mostly men and seem to target Jews and/or Muslim migrants and perceived foreigners. The violence in the streets—6 people were injured Monday—is fueled by online vitriol. Photos show that most of the rioters are men. And also like in India and the US, the online chatter by far-right instigations is "extremely brutal, as calls are made blatantly for murder and killings,” according to an anti-racism organizer.

Men in the US and Germany do not face the same dire demographic realities as young Hindu men in India. But the obsession with being 'replaced' ("Jews will not replace us!" chanted the rioters in Charlottesville) by an 'other,' whether that's refugees from war-torn countries like Syria and Afghanistan or Latin America or Jews or blacks or religious minorities—seem deeply entangled in socioeconomic, gender and demographic phenomena that are unlikely to be peaceably resolved any time soon.