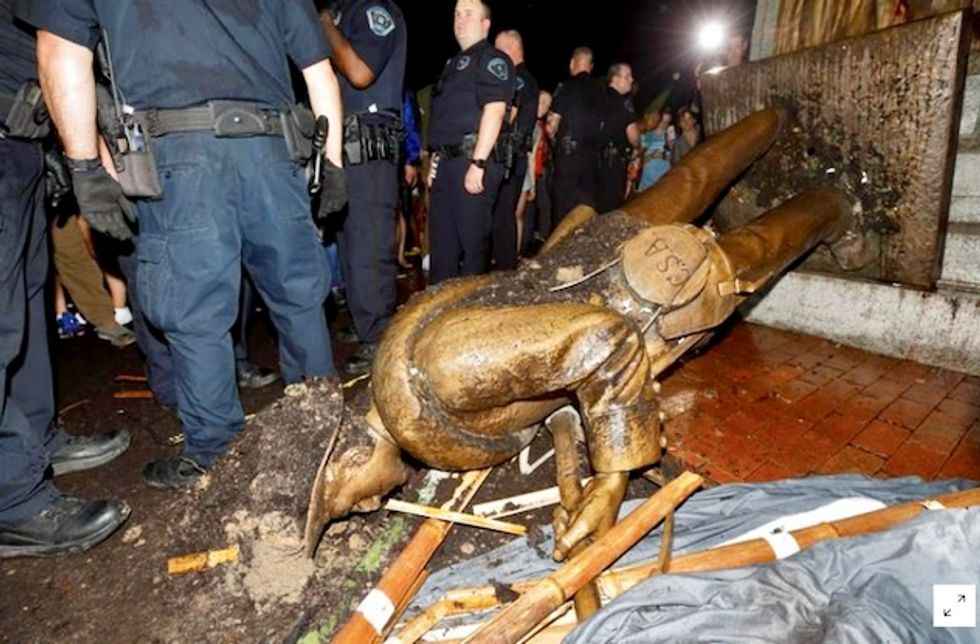 University of North Carolina police surround the toppled statue of a Confederate soldier nicknamed Silent Sam on the school's campus after a demonstration for its removal in Chapel Hill, North Carolina, U.S. August 20, 2018. REUTERS/Jonathan Drake

University of North Carolina at Chapel Hill police accused three people of violations related to the toppling of a statue of a Confederate soldier on campus, a university police spokesman said on Friday.

About 300 demonstrators gathered on Monday evening for a protest and march at the base of Silent Sam, a memorial erected in 1913 to soldiers of the pro-slavery Confederacy killed during the Civil War. Protesters pulled the statue down with rope, cheering as it lay face down in the mud, its head and back covered in dirt.

Each of the three people faces misdemeanor charges of riot and defacing of a public monument, university police spokesman Randy Young said in an emailed statement.

The three are not affiliated with the University of North Carolina, Young said. The police investigation is ongoing and there may be additional arrests, he said.

The incident was part of a recent movement to dismantle U.S. Civil War symbols that critics say glorify the South’s legacy of slavery. Many Americans see statues such as Silent Sam as symbols of racism and glorifications of the Southern states’ defense of slavery. Supporters view them as important symbols of American history.

University of North Carolina police reviewed video on Tuesday to identify the protesters who toppled the statue.

The UNC system board chair, Harry Smith Jr, and president, Margaret Spellings, denounced the toppling of the statue.

Last year UNC students threatened to sue the school, alleging that the university violated federal anti-discrimination laws by allowing the statue to remain on campus.

Reporting by Suzannah Gonzales in Chicago; Editing by Alistair Bell