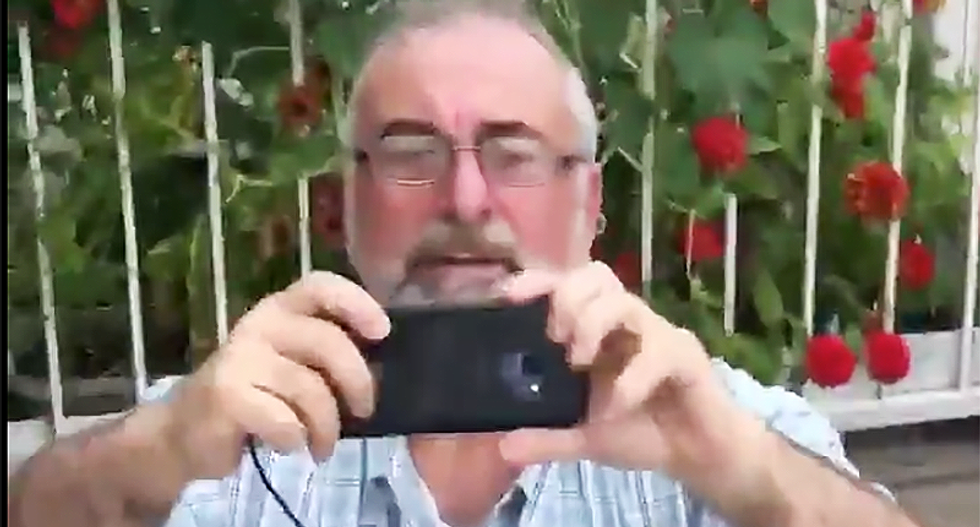 Process server in NY claiming to be with Sheriff (Photo: Screen capture)

Brooklyn resident Anna Chambers alleged that she was raped by two New York Police detectives in the back of a police van Sept. 2017. Wednesday, however, she was left a subpoena by a process server who called her "a stupid b*tch."

In an interview with Gothamist, Chambers explained she came home to find him in her yard, behind the gate. He was filming her with his phone and referenced the subpoena on her front steps.

The man is seen following her as she walks down the sidewalk toward her gate, seemingly blocking her from entering her home. She gets past him to walk up her stairs and says "thank you," telling him to get off of her property.

He identified himself as being with the sheriff's office and told her he "could do whatever I want."

"Why do you cover your face? What are you afraid of, Anna? This isn’t Russia. I’m not the KGB,” the man said.

At the end of the video as she's turning to go inside he's heard calling her "a stupid b*tch."

Chambers's attorney Michael David told Gothamist that the video proves "witness intimidation" and he plans to report it to the city and ask the attorney general to launch an investigation.

"He had a badge on him and he claimed he was from the sheriff's office," the attorney said. "That's impersonating a police officer; that's a crime. And he said 'I can do whatever I want.' That's police abuse. And he's denigrating women with that 'b*tch' remark; not just a rape victim, all women. So even if he's a licensed process server, that's wrong. You don't denigrate women and use language like that."

In her complaint, Chambers identified two former narcotics detectives, Richard Hall and Eddie Martins, pulling her over, handcuffing her and arresting her for prescription medication and marijuana they claimed was found in her car. She said that they then took turns raping her in the back of the police van. A DNA rape kit matched both detectives. The men then tried to claim that the sex was consensual.

Both men have since resigned from the NYPD and the Brooklyn DA is prosecuting them for rape and kidnapping. They face up to 25 years in prison.

There was a loophole in New York law that let officers have consensual sex with a person in custody without facing any punishment. Chambers' case prompted a bill closing the loophole and making it illegal.

You can read the full report at Gothamist. Watch the video from Chambers below: