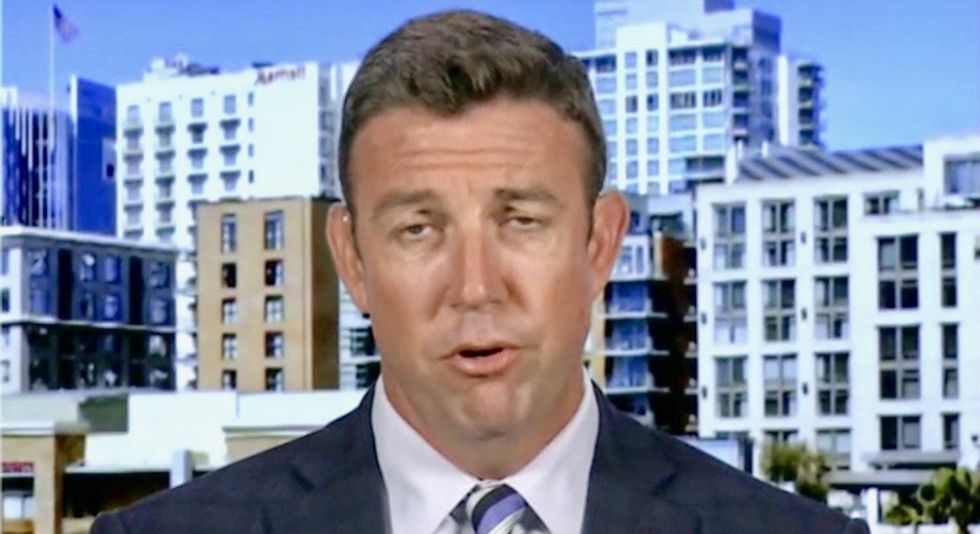 Rep. Duncan Hunter (R-CA) and his wife have been indicted for a number of campaign finance charges and fraud. Now an extensive New York Times profile is detailing the shocking lifestyle the Congressman lived in Washington.

Outside of Washington, Hunter was a family man, who helped neighbors with their yard work or moving large furniture. Inside the beltway, however, the California Republican was shelling out hundreds of dollars for tequila shots and dropping thousands on fancy dinners.

“He was here a lot, some days he was in here multiple times a day,” said Stephanie Connon, a manager of the Capital Hill bar Bullfeathers.

He was, “Trump before Trump,” staffers like to call him. Little did they know that extended to having fun on someone else's dime.

Hunter has blamed both a "deep state" conspiracy and thrown his wife under the bus, claiming she was responsible for the couple's finances.

“Whatever she did, that will be looked at, too, I’m sure,” he said. “I didn’t do it. I didn’t spend any money illegally.”

Surely as a member of Congress Hunter knows the difference. The Times wrote Mrs. Hunter stayed primarily in California while her husband was on Capitol Hill. She tried to "keep up appearances" while living on $174,000 annual Congressional salary. While that might work for everyday American families, it hardly handled the cost of private schools for three children, a mortgage for a fancy house and partying in The Beltway.

Just days before Christmas 2009, Hunter wrote on his website about a need for "greater financial freedom" and railed against the national debt.

“Most often, I hear concerns from working Americans about the future of their children and grandchildren, and the debt burden they will unfairly inherit,” he wrote.

Just weeks later, Hunter didn't have enough money in his bank account to cover a ski weekend at Lake Tahoe. So, he dipped into campaign funds to rent a car for the drive to the mountains, according to the indictment. Additional charges sprouted up days later for the Hyatt Regency Lake Tahoe Resort Spa and Casino. The $1,359 in Tahoe was just the beginning of a year of spending. One family trip to Italy totaled $14,261.33 and $32.31 at the grocery store for milk, apples, chewing tobacco and a pack of cigarettes.

“This is a tragic unraveling of someone who should probably never have gone to Congress,” said ex-Assemblyman Nathan Fletcher.

Hunter became the heir apparent to his father's Congressional seat in San Diego after three combat tours. In some cases, the couple tried to claim that the personal expenses were meant for charitable causes, including veterans' charities. The Times reported many veterans have referred to him as a "blue falcon," a term military members use to call out someone who sacrifices his friends for his benefit.

For veterans seeking help from his office, it became apparent Hunter wasn't going to step up for them unless it meant some camera time on Fox News.

“At some point, it became clear I shouldn’t be talking to his office,” said Kristofer Goldsmith, of High Ground Veterans Advocacy.

While Paul Manafort may have shelled out $15,000 for ostrich jackets, the Hunters were using their money to pay the cable bill, prescriptions or dinner at In ‘N Out. Meanwhile, he was railing against overspending.

“The federal government is like a family that has overspent and racked up too many bills,” Hunter wrote in a 2013 post on his site.

Back home, however, he was a different man. The retired school teacher who lives next door described it all as "like Jekyll and Hyde.”

Read the full story at the New York Times.