REVEALED: Jared Kushner's ties to the Kremlin began in 2016 when he met Henry Kissinger at his pro-Russia think tank 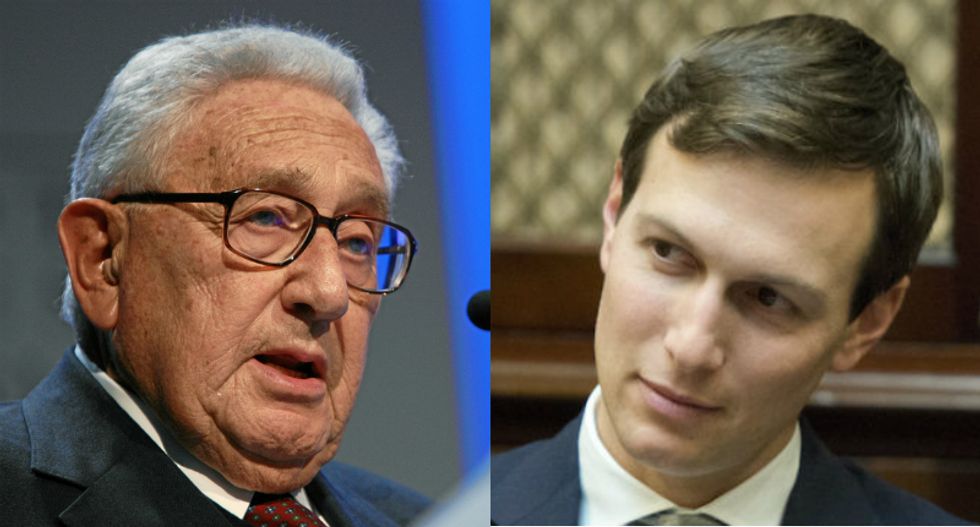 Donald Trump's son-in-law Jared Kushner proved his foreign policy worth after connecting with Henry Kissinger and his Russia-linked think tank in a newly-uncovered meeting in March 2016.

Bloomberg News reported that prior to the meeting with the pro-Russia Center for the National Interest, which took place at New York's Time Warner Center, Kushner hadn't yet become the campaign's foreign policy guru. Kissinger, who at the time was the honorary chairman of the think tank founded by Richard Nixon, was the "main event" at the small lunch meeting.

At the event, the former secretary of state "gave a talk that included analyzing U.S.-Russia relations," Bloomberg noted. Kushner approached him after the talk to introduce himself.

Kissinger confirmed that the two met at the Time Warner Center in March 2016, and as the report noted, it was he who a year later wrote a glowing biography of Kushner for Time's "100 Most Influential" list.

In that same meeting, Kushner also met Dimitri Simes, the center's Russian-born president who publishes the group's National Interest magazine. In the weeks following the meeting, the report noted, Kushner and Simes discussed a potential event hosted by the center that would allow the then-black sheep candidate "a chance to lay out a cohesive foreign policy speech."

Their talks came to fruition the next month when Trump outlined his "America First" foreign policy platform at D.C.'s Mayflower Hotel. As the reported noted, the Center for the National Interest helped write the speech and provided some of the guest list for the event.

That same night at the Mayflower, Kushner met Russian ambassador Sergey Kislyak for the first time — a meeting he infamously left off of his security clearance forms.