Sarah Sanders flails as she's grilled on Trump's Russia tweet: 'The president is not obstructing, he’s fighting back' 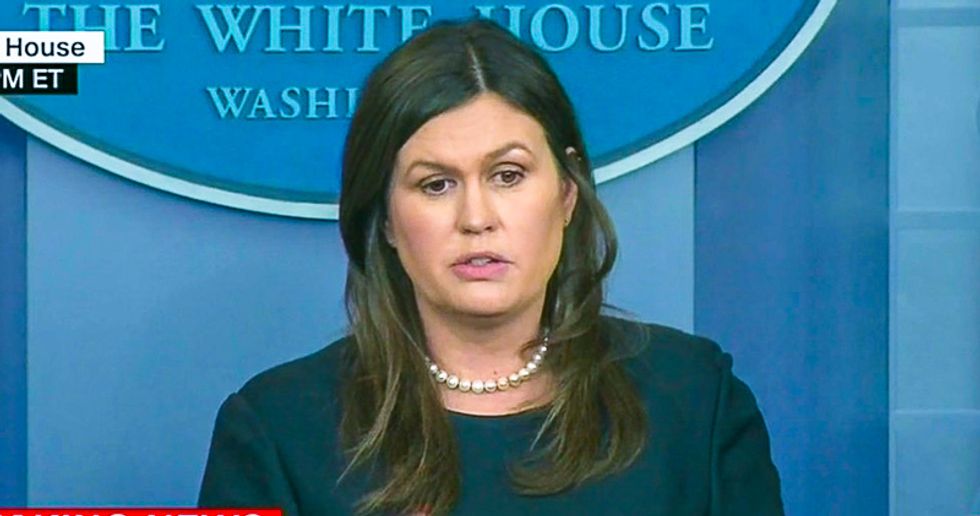 White House Press Secretary Sarah Sanders on Wednesday insisted that President Donald Trump did not obstruct justice when he said that Attorney General Jeff Sessions should end the investigation into Russia's interference in the 2016 U.S. election.

At a White House briefing, Sanders was asked about Trump's Wednesday tweet about shutting down the probe into Russia's interference and possible collusion within the Trump campaign.

"It’s not an order, it’s the president’s opinion," Sanders insisted to White House reporters. "The president is not obstructing. He's fighting back. The president is stating his opinion. He's stating it clearly. And he certainly is expressing the frustration that he has with the level of corruption that we've seen from people like Jim Comey, Peter Strzok. Most of America is angry as well and there's no real reason he shouldn't be able to voice that opinion."

Sanders went on to say that special counsel Robert Mueller's investigation should be completed "sooner rather than later."

"It's gone on for an extensive amount of time," she opined. "They've still come up with nothing in regards to the president. We'd like to see it come to a close."

"The entire investigation is based off of a dirty, discredited dossier that was paid for by an opposing campaign and had a lot of corruption within the entity which was overseeing it, which was Peter Strzok, James Comey, Andrew McCabe," Sanders added. "I don't think we have to go into it every time we're here."