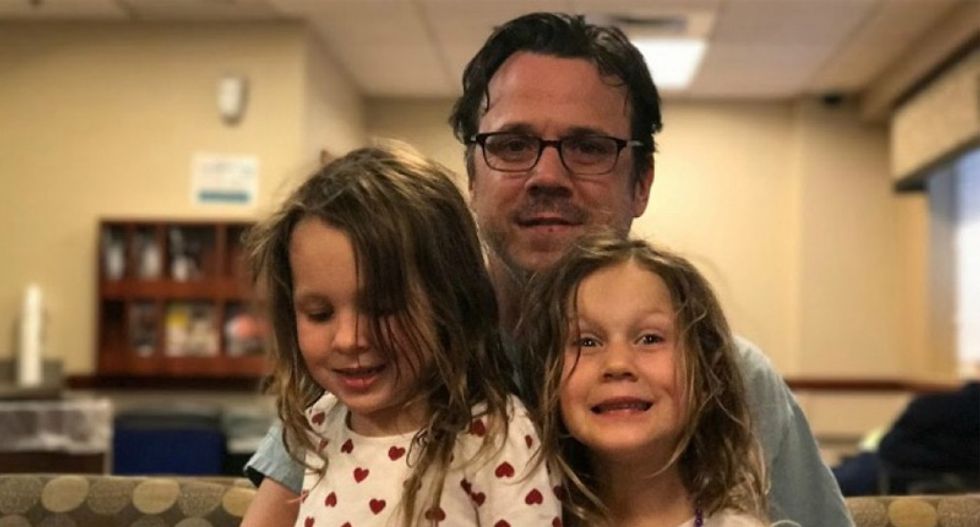 Drew Calver’s daughters visit him at the hospital in April 2017 after his heart attack and resulting emergency surgery. (Photo: Courtesy of the Calver family)

Adding yet another horrifying anecdote to the ever-growing list of reasons the United States urgently needs to transition away from its disastrous for-profit system to Medicare for All—which is backed by 70 percent of Americans—Kaiser Health News(KHN) and NPR on Monday published the story of Drew Calver, a 44-year-old teacher with health insurance who was billed nearly $109,000 by a Texas hospital after he suffered a heart attack.

"The heart attack was a shock for Calver, an avid swimmer who had competed in an Ironman triathlon just five months before," KHN reports. "Despite the surprise, even from his hospital bed, Calver asked whether his health insurance would cover all of this, a financial worry that accompanies nearly every American hospital stay."

St. David's Medical Center—the Texas hospital where Calver had emergency surgery—assured the teacher and father of two that they would accept his insurance, despite the fact that the facility is classified as "out-of-network" on his Aetna healthcare plan.

But then, months after Calver's heart attack and operation, the bills arrived.

"They're going to give me another heart attack stressing over this bill," Calver told KHN. "I can't pay this bill on my teacher salary, and I don't want this to go to a debt collector."

Calver's story provoked outrage but not surprise, given that the 44-year-old teacher is one of millions of Americans who have been threatened with financial ruin by the United States' for-profit healthcare system, which—compared to other advanced nations—is uniquely expensive while still delivering terrible results.

According to a recent study by the Koch-funded Mercatus Center, Medicare for All would save Americans $2 trillion in healthcare spending while covering everybody.

"How anyone can read stories like this and still think the for-profit health insurance model is acceptable is baffling to me," noted journalist Ben Spielberg, expressing a sentiment that was echoed across social media in response to Calver's story.

This @chadterhune story (along with other "Bill of the Month" features) blows a hole in the commonly held belief th… https://t.co/BWAvBuinDg
— Bob Herman (@Bob Herman)1535382837.0

Strikingly, and shortly after KHN and NPR published their piece on Calver's heart attack and resulting financial turmoil, St. David's Medical Center said it has decided to reduce Calver's bill from $109,000 to $782 because he qualifies for the hospital's "financial assistance discount."

"Calver disputed that he owes any additional money to St. David's and said this situation should have been resolved long before now," KHN reported.

Critics viewed St. David's rapid reversal in the face of backlash as confirmation that the initial bill was just a massive grift, which hospitals and insurance companies likely get away with on a regular basis, given that not every victim of America's for-profit healthcare system is lucky enough to have their horror-story featured in major news publications.

"Notice that every single time a news outlet publishes one of these stories, the hospital either waives the charges, or offers the patient a settlement," Slate's Jordan Weissmann wrote on Twitter. "That seems like a pretty good fucking sign that the bill was bullshit profiteering in the first place."

"The lesson is, if you live in America and get charged an outrageous medical bill, you better hope you can find a journalist to write about it," concluded Splinter's Libby Watson.

For those who can't find a journalist to write about their insane hospital and insurance bills, KHN and NPR conclude their article with a series of basic action steps.

"Faced with a surprise bill or a balance-billing situation, don't rush to pay any medical bills you receive. First, let the insurance process play out completely so you’re sure what the health plan is paying the hospital and doctors," the outlets advise. "Ask for an itemized bill. Review the charges carefully and talk to your insurer, your employer, and the hospital if the prices seem out of line. Arm yourself with estimates you can find online of the average prices charged in your area as you negotiate with all the players. If the bills keep coming, talk to your employer's benefits department or the state insurance department about your legal protections."

And here's one final step, which is not mentioned by KHN and NPR: Contact your member of Congress and demand that they support Medicare for All, which is gaining momentum in the House and Senate.