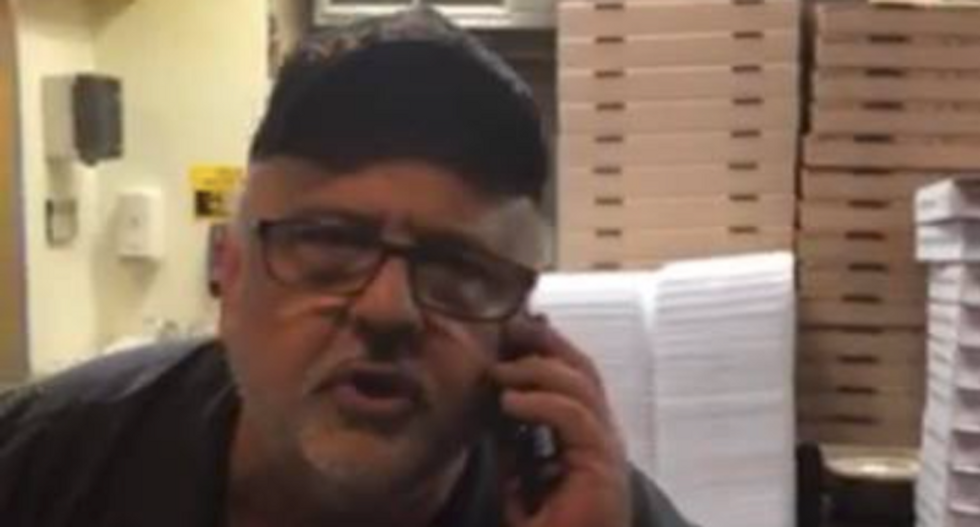 A Dallas, Texas pizza owner has been accused of using a racial slur against black customers and calling the police on them when the encounter escalated.

After he allegedly used the racist slur, one of the women started filming the encounter. In the video Pinto yells, "Get the fuck out of here you piece of ... you know what." He calls the police, telling them that he's got "trouble" at the store.

"This is America," one of the women says, to drive home the point that you're not supposed to derisively call black people "darkie."

"What do you know about America?" he retorts.

"They have a racial complaint with me and they don't want to leave," he tells police. "They want to press charges because they think I'm too white for them," he tells the dispatcher. He also insults the women's weight.

"A racist business owner. Others were there. They did nothing," Tamika Sanders wrote on Facebook. "Said nothing. One guy tried to tell me that he was really a nice guy. How? He had his fist clenched at his sides when he approached me and yelled for me to get “the fuck out”!"

"Please share. And if you’re a person of color, or have any regard for civil rights, this is the last place you should be spending your money."

Eater reports that there have been previous complaints about racist behavior at the establishment, including an Uber Eats driver who claims Pinto's wife called her the n-word.

The NAACP urged the women to file a police report.