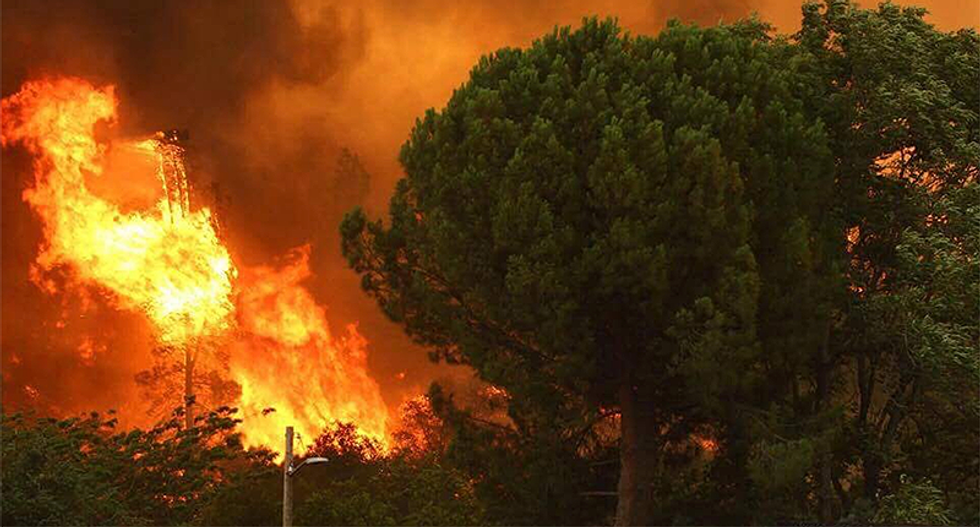 President Donald Trump spread a bizarre conspiracy theory in a Sunday tweet. As the California wildfires rage outside of Redding, the president thinks that the state is allowing the fires to burn because they're rerouting water into the Pacific Ocean.

It's unclear where the conspiracy theory began, but one possibility is a 2015 interview with an urban water expert, who explained that all states could save water by rerouting gutters, drainage ditches and other means of rain collection into water treatment facilities. Collecting rainwater is a far cry from the state purposefully diverting water from fires and pouring it into the ocean instead.

It's entirely possible for states, cities and the United States as a whole to divert all rainwater to be used for water treatment, but that would require a massive rebuilding of American infrastructure. Trump has yet to pass his transportation bill he promised during the 2016 campaign.

"California wildfires are being magnified & made so much worse by the bad environmental laws which aren’t allowing massive amount of readily available water to be properly utilized. It is being diverted into the Pacific Ocean. Must also tree clear to stop fire spreading!" Trump tweeted.

The second thought from Trump is from Interior Sec. Ryan Zinke. The policy on stopping fires is that if there's nothing to burn, fires won't be started. Thus, Trump and Zinke advocate deforestation. There's one problem with that, as Oklahoma, Texas and Kansas residents can attest, trees aren't needed for fire. Kansas farmers are known to burn fields and Oklahomans see grass fires frequently during the drought of the last several years. One grassfire in Texas burned over 500 acres over the weekend.

Trump followed up Monday with a tweet attacking Jerry Brown for allowing the free-flowing of water.

"Governor Jerry Brown must allow the Free Flow of the vast amounts of water coming from the North and foolishly being diverted into the Pacific Ocean. Can be used for fires, farming and everything else. Think of California with plenty of Water - Nice! Fast Federal govt. approvals." Trump tweeted.

Here are some heartbreaking photos of the fires below: