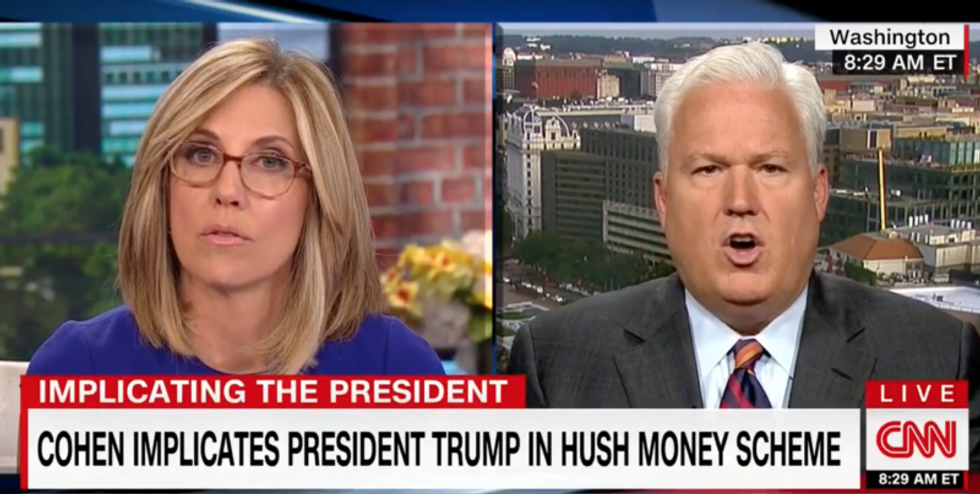 "I think Michael Cohen is someone who, like Paul Manafort, who had an elaborate scheme to not pay their taxes and committed a lot of financial crimes and in Cohen's case, because they had him over a barrel, because they had all these crimes that they could prosecute him for they got him to sign a plea that was not negotiated, it was take it or leave it and he signed it to save his own hide and get a reduced sentence", began Schlapp in a lengthy filibuster that was clearly a desperate attempt to downplay the seriousness of Cohen's guilty plea.

Schlapp, who is married to Trump's Director of Strategic Communications, continued trying to bury Camerota in an avalanche of words. "What I'm answering your question on is I don't believe that the transactions associated with these two people are FEC crimes and I believe that Michael Cohen pled guilty to crimes in the plea deal that aren't in fact crimes.

"What I think you're doing is a lot of fancy rhetorical footwork," she began, before Schlapp cut her off.

Later he tried again, shouting, "I have a First Amendment right to answer. I will answer any question you pose to me. If you're going to turn this into a morals case against Donald Trump what the reason for the special counsel was to determine whether or not there was collusion with Putin's government, I think that that is the ultimate redirect and I think it bastardizes this."

Schlapp was undeterred, claiming "I think what happens with... people who are famous, people who are rich, face bad stories and take steps to squelch those stories."

"And they rarely plead guilty to those fake stories," Camerota shot back.