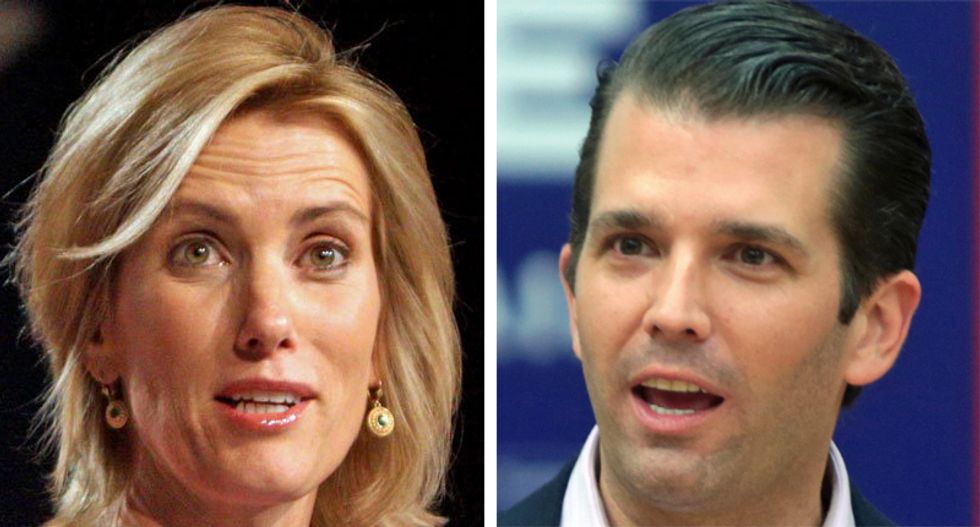 Donald Trump, Jr. spoke out on Monday about his controversial Trump Tower meeting on Monday, after his father's weekend tweet appeared to throw his namesake son under the bus.

The Executive VP of development and acquisitions at The Trump Organization addressed his legal predicament from the friendly confines of the Laura Ingraham radio show.

After playing criticism of the shifting story, Ingraham said, "you want any comments on that Donnie, because they're hitting you on that for contradictions. I mean, they're calling it worse than contradictions, obviously."

"Donnie, what is your reaction to all that?" Ingraham asked.

There was a seven second pause following the question.

"Hey Donnie, you there?" Ingraham asked.

MSNBC reported on the interview, noting that Trump Jr. eventually came back on Ingraham’s radio show to blame the media.

"When he -- asked about it on the radio - the line went dead," Jansing reported. "And then blamed the press and the Democrats. And the story of what led to the meeting, the story keeps changing."

"Let's start with a double dose of Donald Trump. Just moments ago, Donald Trump, Jr. making first comments after his father appeared to put him in even more legal peril with a tweet on Sunday. This is what Donald Trump, Jr. said to conservative commentator Laura Ingraham on her radio show.

"Basically, he says his story has been consistent from day one," she explained.