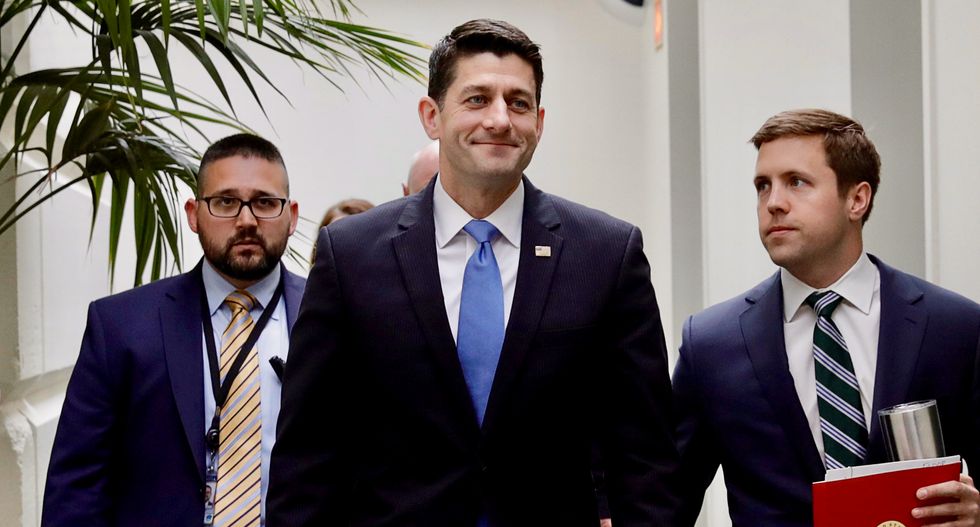 Speaker of the House Paul Ryan smiles as he departs a meeting at the U.S. Capitol before a vote to repeal Obamacare in Washington, D.C., U.S., May 4, 2017. REUTERS/Kevin Lamarque

Trump and Republicans in Congress haven’t been able to officially kill the Affordable Care Act. But they’re quietly using 5 strategies to destroy it. Know what they’re doing so you can hold them accountable on Election Day.

1. They’ve repealed the requirement that all Americans sign up for health insurance. Republicans slipped this repeal into their tax cut for the wealthy and corporations.

But that requirement had meant enough healthy people were enrolled to cover the sick. Without it, 4 million Americans will lose coverage by 2019 and premiums will increase by 10 percent, according to the Congressional Budget Office.

2. They’ve cut subsidies that help an estimated 6 million low-income Americans afford coverage through private insurers. Trump wants you to believe these cuts will save money. Baloney. Ending the subsidies is expected to drive up premiums, thereby increasing costs for taxpayers.

3. They want to flood the insurance market with junk plans. They’ve made it easier for small businesses and individuals to buy alternative types of health insurance with fewer benefits and weaker protections. This will leave sicker people and those with pre-existing conditions out in the cold.

4. They’ve made it harder for people to sign up for coverage – shortening the enrollment period, scaling back outreach efforts, increasing the amount of paperwork. It’s even been reported that the Trump administration redirected funds from a marketing campaign designed to promote enrollment to a campaign criticizing the law.

5. They’ve stopped defending key provisions of the law in court. The Justice Department has stopped defending the Affordable Care Act’s protections for Americans with preexisting conditions in a case brought by Republican attorneys general.

Remember, the Affordable Care Act was enacted in 2010 in order to make health insurance available to people regardless of their income or their health condition.  It wasn’t perfect and was just one step toward a real solution like Medicare for All, but it was a historic piece of legislation.

Now, Trump is taking a wrecking ball to it. He promised during his campaign he’d repeal and replace it with something “far better,” but he’s not replacing it with anything. He’s just destroying it, step by step.

Don’t let Trump and his enablers hide what they are doing. When millions – including huge numbers of Trump supporters – lose the health coverage they had or their premiums go up, make sure Trump and the Republicans are held accountable.