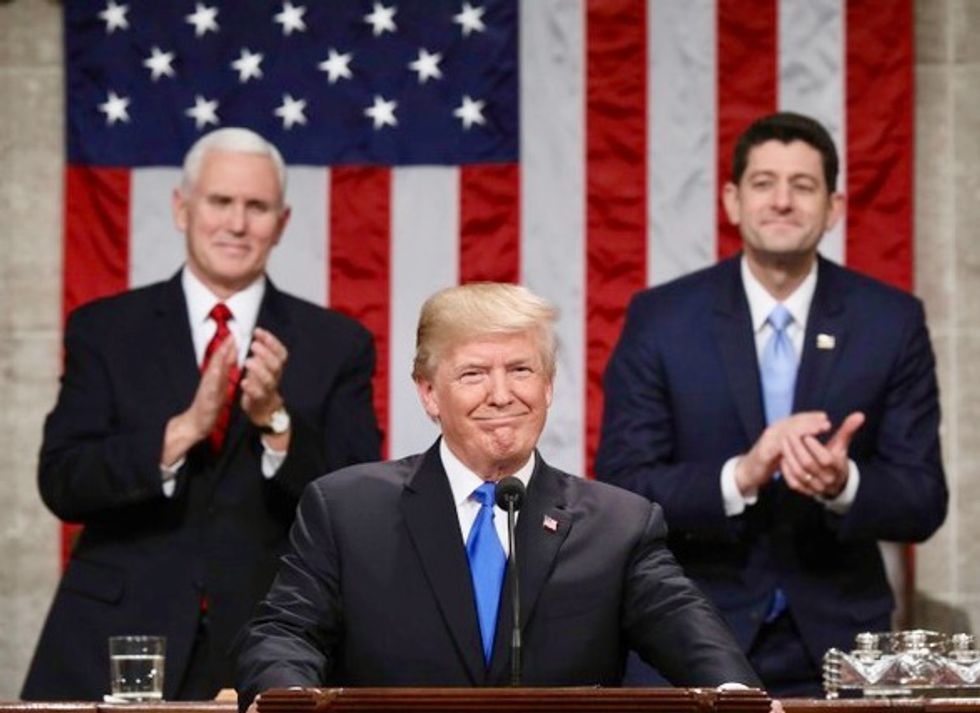 U.S. President Donald J. Trump (C) stands at the podium as U.S. Vice President Mike Pence (L) and Speaker of the House U.S. Rep. Paul Ryan (R-WI) (R) look on during his first State of the Union address to a joint session of Congress inside the House Chamber on Capitol Hill in Washington, U.S., January 30, 2018. REUTERS/Win McNamee/Pool

That is essentially what happened when Benjamin Wittes, the journalist behind the blog Lawfare, filed Freedom of Information Act requests in April 2017 to find out whether there was any truth to this statement made by Trump in his February 2017 State of the Union address:

According to data provided by the Department of Justice, the vast majority of individuals convicted of terrorism and terrorism-related offenses since 9/11 came here from outside of our country.

Trump reiterated this claim last January, tweeting that a "new report from DOJ & DHS shows that nearly 3 in 4 individuals convicted of terrorism-related charges are foreign-born. We have submitted to Congress a list of resources and reforms we need to keep America safe, including moving away from a random chain migration and lottery system, to one that is merit-based."

When the Department of Justice did not respond to Wittes' April FOIA request, he filed suit against the department, as he explained on his blog earlier this week. Over a protracted stretch of time, and after much back-and-forth with bureaucrats, he received the information he needed to conclude that Trump claim was blatantly false: Most people convicted of terrorism and terrorism-related offenses since the 9/11 attacks have not come from outside the U.S. Trump's own Justice Department officials confirmed as much in their letter declaring that they had acceded to Wittes' FOIA request.

This brings us to acclaimed Harvard law professor Laurence Tribe, who tweeted his own thoughts about the Justice letter on Friday.

Salon reached out to Tribe to unpack his thoughts on the deeper meaning behind both Trump's lie about immigrants and the seemingly remarkable fact that his own government has been forced to acknowledge the untruth.

"When I heard the president's State of the Union speech and his claim that a vast majority of the terrorists' actions in the United States subsequent to 9/11 were committed by immigrants, people who were born abroad, I had my doubts because I had never seen anything like that," Tribe told Salon. "But it seemed to me to be of a piece with the president's persistent pattern of demonizing and scapegoating immigrants as part of his appeal to the hard core of his base."

Tribe observed that it's highly unusual for a president to be undercut by his own officials this way. "For the Justice Department in effect to say that the president was lying, which is how I read their letter, is quite remarkable," Tribe said. "I don't think I know of any other instance in American history in which a president's own Justice Department had to say that the president was making up information that simply didn't exist. I think it's quite outrageous, and I'm glad that Ben Wittes pursued the matter."

Perhaps the most troubling aspect of this isn't that the president was caught in a lie. Politicians, after all, are not exactly celebrated for their fealty to the truth. But Trump didn't merely embellish the truth or play with words to wriggle out of some political jam. He outright fabricated reality in order to vilify millions of people and advance his own agenda. The feat of using pure fiction to stir up hate and prop up one's own political career is, Tribe noted, very unusual among presidents.

"I think things that are verifiably false, claims of a factual nature about what the data of the Department of Justice show or how many people were at the inauguration, those are not the kinds of lies that prior presidents have told," Tribe told Salon.

"They have exaggerated: I think President Obama, when he said you can keep your doctor under Obamacare no matter what, was not describing the truth, but I really doubt that he was deliberately fabricating. It really is hard to find instances. Maybe when George W. Bush said that there were weapons of mass destruction [in Iraq], one might call that a lie. Yet it was backed up by data from his own administration, by people under him who had massaged the information, and he probably believed it.

"I think that, in Trump's case, we have something that is qualitatively different. If he actually believes the absolutely falsifiable statements that he makes, then he is mentally ill. If he doesn't believe it, he is deliberately lying. I don't think in our history we've had any president who comes close to that."

As to whether there is anything that Americans can do to convince fellow citizens who have drunk the Trump Kool-Aid that we are in the midst of a crisis, Tribe suggested that our country faces an existential dilemma.

"I wish I knew the answer to that question," Tribe told Salon. "I recently read a wonderful book by Michiko Kakutani called 'The Death of Truth' in which she describes the dangerous trend toward simply disregarding facts, a trend that has grown in our history and has now reached a real peak.

"When the president's staffers talk about 'alternative facts,' and when the president says 'What you see and what you read isn't what's really happening,' and when people at his rallies say that they would automatically believe whatever he says, I think the question you put is a really urgent one.

"I do hope that the hardcore of people who have simply turned away from reality and are willing to accept the president's claims regardless of the evidence -- I hope that core is dwindling. And I do think that if we keep hammering away at what the real facts are, a vast majority of the American people — including independents and including many Republicans, though not those in Congress and in the leadership — are gradually going to realize what a threat is posed by the trend that the president is feeding and encouraging. If people get out and vote, people who ordinarily would sit back in the midterms, there might be an enormous repudiation of the president's departure from factuality and truth and reality."