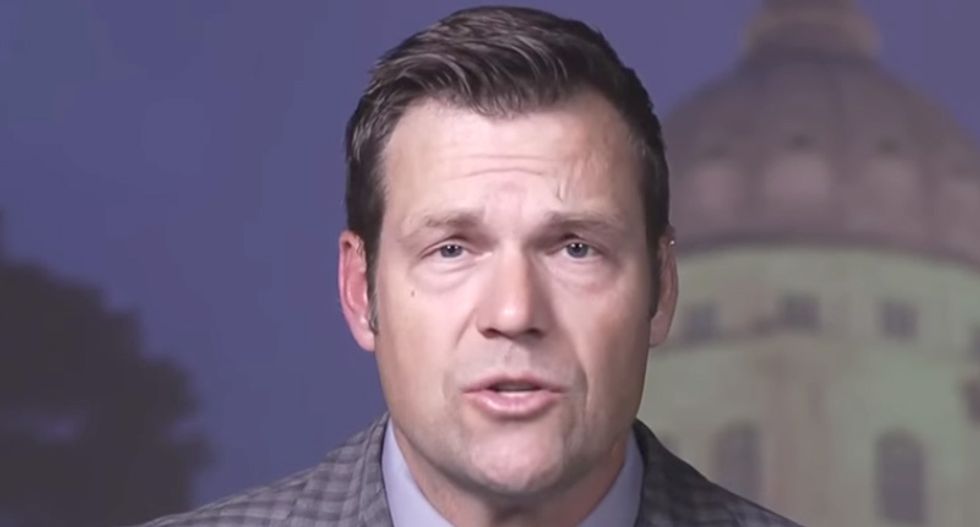 President Donald Trump's endorsement of controversial Kansas Secretary of State Kris Kobach may give Democrats a unique opportunity to win the governor's mansion in a deep red state.

Republican leaders had feared Trump would weigh in on the race for Kobach, who lead the president's controversial commission on election integrity, which was dissolved after finding no evidence of voter fraud.

On Sunday, Axios previewed "what's next" with a focus on whether Trump would endorse in the gubernatorial primary.

"Senior Republican officials have told me they're holding their breath, hoping Trump won't endorse hardliner Kris Kobach in Tuesday's Kansas gubernatorial primary," Jonathan Swan reported. "Kobach is as far right as a Republican gets on immigration and voting rights, and Democrats view his potential victory as an opportunity to steal centrist voters."

"A source close to Trump told me they thought the president had been convinced to hold off on supporting Kobach. But he added he couldn't be confident, given that Trump is in Bedminster with a cell phone and plenty of Executive Time," Axios noted.

McClatchy senior political correspondent Katie Glueck described Trump's actions as, "exactly what a lot of Republicans did NOT want him to do."

CNN senior writer and analyst Harry Enten described it as a "disaster" for the Kansas Republican Party.

"Trump isn't the only one rooting for Kobach in Tuesday's GOP gubernatorial primary in Kansas: Democrats hope he wins, too," explained CNBC White House correspondent Christina Wilkie. "They would much rather face far-right Kobach in November than the more moderate Republican, Gov. Jeff Colyer."

Huffington Post senior political reporter Kevin Robillard described Trump's tweet as "endorsing a candidate over the RGA’s wishes to own the libs."

If Kobach wins the nomination, Trump's tweet could have been a deciding factor, as Robillard noted that "Kobach, per GOP internals, is still trailing Coyler."

Kobach, for his part, welcomed the endorsement.