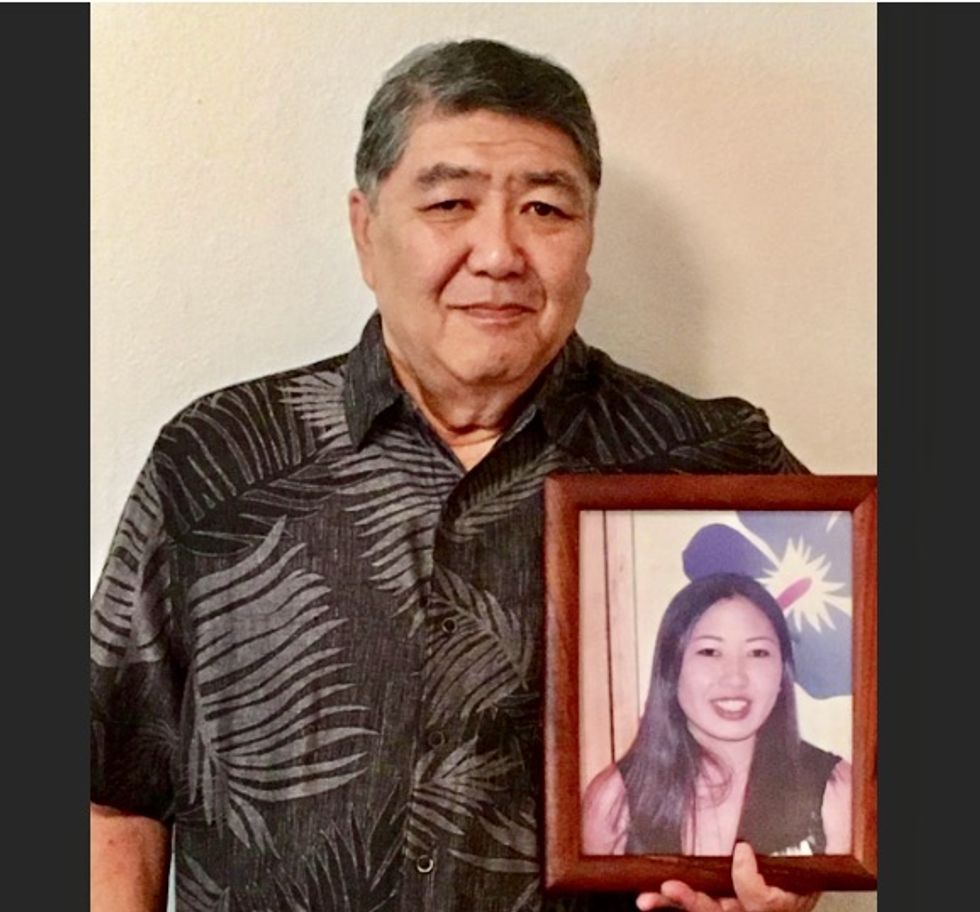 George Young holds a framed photo of his late daughter Tim Young in Hilo, Hawaii, U.S., July 30, 2018. Picture taken July 30, 2018. Courtesy Lynn Viale/Handout via REUTERS ATTENTION EDITORS - THIS IMAGE HAS BEEN SUPPLIED BY A THIRD PARTY. NO RESALES. NO ARCHIVES.

George Young is a Vietnam War veteran who sued the state of Hawaii three times on his own without a lawyer for the right to carry a handgun, and lost each time.

Alan Beck is an independent lawyer who took on Young’s appeal for free.

Last month, the duo won a major victory for gun rights when an appeals court found Hawaii’s restrictive handgun law unconstitutional, a ruling that could lead to a landmark decision from the U.S. Supreme Court on the right to bear arms in public. And they did so without the help of the powerful National Rifle Association (NRA) gun lobby.

“I went around the state of Hawaii and contacted about 17 attorneys and all of them turned me down. They said I would only lose,” said Young, 68. “I want to see it through to the end, which is the U.S. Supreme Court.”

U.S gun-control advocates favor strict laws like Hawaii’s, blaming lax gun laws for excessive gun violence and deadly mass shootings in the United States. The NRA and other gun-rights advocates oppose laws that restrict the constitutional right to bear arms and want the high court to take up a new case, hoping it will expand gun rights outside the home.

The Supreme Court has not taken on a major gun-rights case since a pair of cases in 2008 and 2010 in which the court established that the U.S. Constitution’s Second Amendment protects an individual’s right to keep a gun at home.

Hawaii allows only people who work in security or who can demonstrate to law enforcement officials that they have an “exceptional case” to carry weapons, concealed or openly.

After he left the Army, Young carried a firearm for 17 years as an airport security guard but lost that right after he retired. He failed to convince the County of Hawaii’s police chief he deserved a permit, so he sued, saying his constitutional right to bear arms was violated.

Lacking the means to hire a lawyer for an appeal, Young would normally have had to depend on a star litigator financed by the NRA or a major law firm to take the case pro bono, or free of cost.

Instead Young paired up with Beck, a solo practitioner who learned of Young’s story and offered to represent him for free.

Beck said he has limited means of his own and that his father has offered to lend him money if needed to keep the case going.

“This covers my pro bono hours for my career. It’s worth it. Sometimes you have to do the right thing,” Beck said.

Based in California but with family ties in Hawaii, Beck said he took Young’s case because he disagreed with the ruling by the U.S. District Court and said Young was denied the leeway that should be afforded to a non-lawyer representing himself.

“I didn’t think he got a fair shake,” Beck said. “We got to know each other very well. I know his family now. I consider him a good friend as well as a client.”

The NRA turned down a request to help with the case, Beck said, declining to elaborate. The NRA was still involved in assisting another lawsuit challenging carry laws when Young filed his suit, which is why the association did not get involved, spokeswoman Amy Hunter said.

On July 24, Young scored his first victory. In a 2-1 ruling, a three-judge panel of the normally liberal 9th U.S. Circuit Court of Appeals found Young has a Second Amendment right to carry a firearm in public. The NRA applauded the ruling.

Hawaii has until Sept. 14 to ask the case to be reheard by the same panel or “en banc” by a larger number of judges.

The state has defended its law by citing the 2008 and 2010 Supreme Court cases, District of Colombia v. Heller and McDonald v. City of Chicago. While those rulings were taken as a victory by gun-rights advocates, proponents of gun control say the court also established limits to the Second Amendment.

“Heller was not intended to extend the protections found in the Second Amendment to any area outside the home,” Hawaii said in a 2013 filing in the case.

‘CIRCUIT SPLIT’Some U.S. appeals courts have upheld state laws that greatly restrict gun carry rights while others have struck them down, creating what is known as “circuit split.” The Supreme Court often hears cases in order to resolve such splits, but it requires four out of nine Supreme Court justices to agree to hear a case.

“As a practical matter, there is indeed a circuit split,” said Eugene Volokh, a UCLA law professor.

Young, who is part native Hawaiian and part descendant of Japanese plantation workers, became passionate about the issue while teaching his late daughter Tim, who died in a car accident in 2004 at age 21, about the Constitution.

“She was my pet. Of my three children she was the one to follow me everywhere,” Young said.

One day, as they discussed the Constitution, Young was startled when she told him he could not carry a handgun in Hawaii, so he began his quest.

“I made the promise that they cannot take your Second Amendment away,” Young said. “So to prove it to her, that’s when I started.”