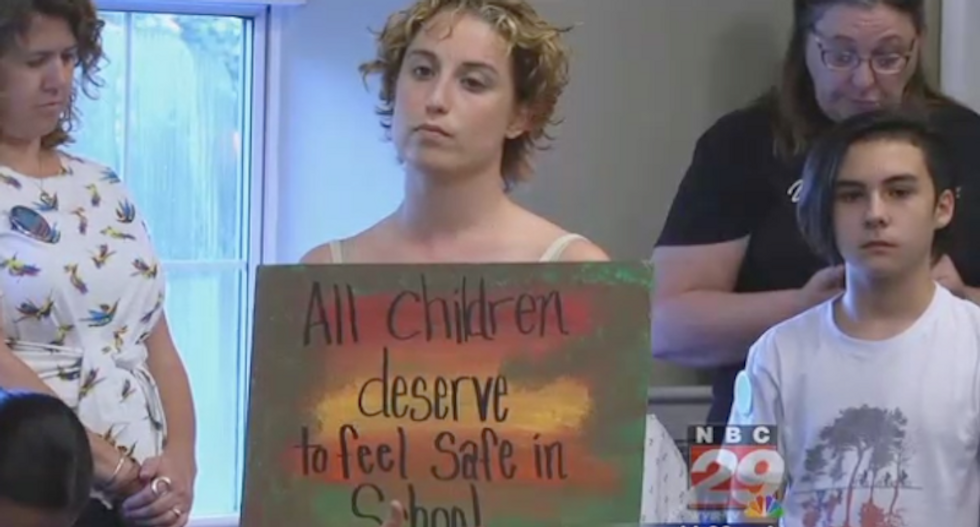 Activist at Albemarle County school board meeting via screen grab.

A school board meeting in Albemarle County, Virginia, abruptly ended after community members who wanted the school to enforce a dress code banning Confederate and other hate symbols were told to be quiet.

The meeting was prompted by a parent's complaint that their child had been traumatized after seeing a student with a Confederate flag symbol on their clothing.

The board was supposed to codify rules on dress code policy "to make it more clear, fair and equal for all students and update disciplinary actions for code violations," reports NBC29.

Within the first ten minutes, people in the audience heckled the board—some yelling "shame." They were reprimanded by board members.

“No clapping, no booing or any other form of noise-making occurs, we would like your assistance with helping continue our meeting tonight,” school board member Jason Buyaki said. “So I would like to call the next speaker and I would ask that everyone remain silent, and if you support a particular view, please stand.”

The meeting was then abruptly cancelled and everyone was told to leave.

A parent with the group Hate Free Schools Coalition outlined their concerns.

"If another student is wearing Confederate flag or imagery that symbolizes the south will rise again and that we will eradicate people of color and marginalize people, if someone sees that, there is some kind of policy in place that allows for the student being impacted to be protected," said Amanda Moxham, a member of the coalition.

She told NBC29 that she's shocked by how quickly the board cancelled the meeting.

"It wasn't our intention to shut the meeting down,” Moxham said. “I'm surprised that they made the choice knowing why we’re here and what we want to talk about. It’s very clear to me that their choice was to shut it down to preserve their own comfort.”