WATCH: Alabama pastor speaks in tongues demanding prayers for Trump because 'witchcraft's trying to take this country over' 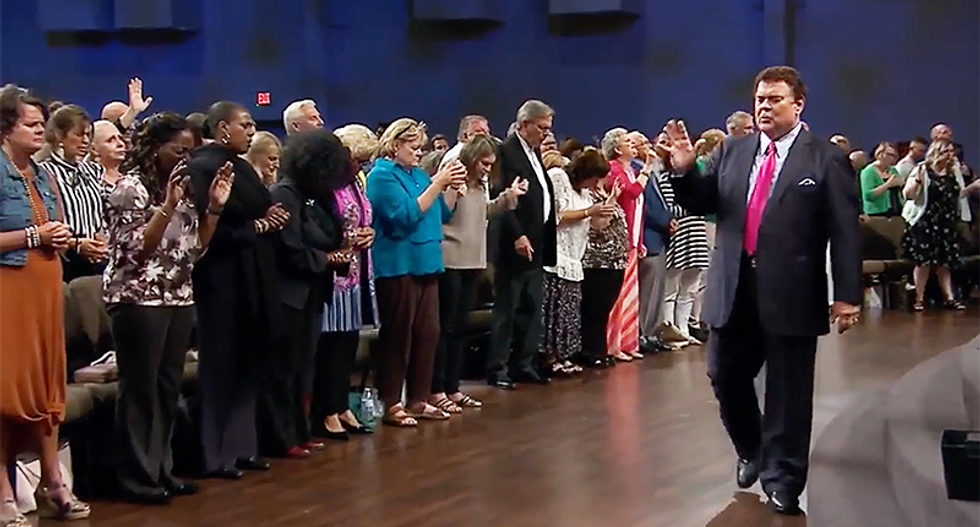 Pastor John Kilpatrick of Church of His Presence in Alabama (Photo: Screen capture)

An Alabama pastor is concerned that "witchcraft" is "trying to take" over the United States and he wants people to pray for President Donald Trump.

AL.com reported Wednesday that Pastor John Kilpatrick of Church of His Presence in Daphne, Alabama posted a video of his Sunday sermon that is garnering several comments on Facebook.

"It's time to pray for the president," Kilpatrick said. He went on to cite 2 Kings 9:22, which blames Jezebel for witchcraft.

Kilpatrick is an Assembly of God (Pentecostal) minister known for hosting revivals in Pensacola, Florida in the late 1990s. The denomination is known for believing in the spiritual gift of healing over medicine and speaking in tongues.

"I am not being political, but I don't see how President Trump bears up under it," Kilpatrick told his church. "He is as strong as I've ever seen a man be. But here's what the Holy Spirit said to me last night and what He said for me to tell you. He said, 'Tell the church that so far, Trump has been dealing with Ahab. But Jezebel's fixing to step out from the shadows.' That's what the Lord said to me."

He relayed the "word" he heard directly from God that cited a Trump conspiracy theory.

"He said, 'Pray for him now, because he said there's about to be a shift, and the Deep State is about to manifest, and it's going to be a showdown like you can't believe,'" Kilpatrick continued. "So, I'm coming to you as a prophet, as a man of God, and I'm telling you, it's time to pray for the president."

The congregation enthusiastically agreed with cheers.

He then started speaking in tongues, before saying "We've got to pray for this man."

In an interview with AL.com, the pastor said he voted for Trump but is a registered Independent. He acknowledged "Trump has his faults. I don't believe he's a man of God. But he may be God's man for this time."

"This president has been under pressure, in an Ahab-like situation," Kilpatrick went on. "When you graduate up to the main power broker, that's Jezebel. I really do feel this way. His greatest attack is yet to come. It's all a culmination."

"It's not a witch after him, it's a spirit of witchcraft trying to muzzle him," he concluded, noting it was not to be confused with Trump's complaint of a "witch hunt."

Watch the sermon below: