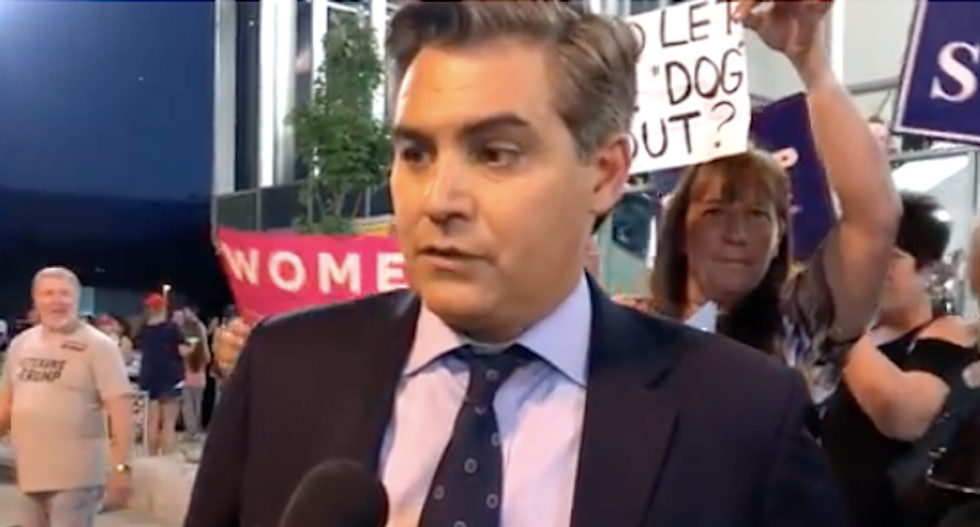 Weaver tried to pin down Acosta as a hypocrite for advocating for the press yet not coming to the defense of Infowars after Alex Jones' materials were purged from various social media platforms.

"I don't really have any comment I'm sorry," he says. What appear to be guards started to try and separate Weaver from Acosta, but he stopped them.

"As a fellow journalist, hashtag free press, are you concerned at all ... "

She wondered if he thought the president had a First Amendment right to attack the media.

Acosta explained how the First Amendment and freedom of the press work in the US.

Civil rights attorney Brian Claypool told Fox Business that a lawsuit filed against members of the Trump family could "bolster" a criminal case.

Former President Donald Trump is in hot legal water yet again, as New York State Attorney General Letitia James has sued Trump, along with his family members and the Trump Organization, for financial fraud and misrepresentation. Trump's legal team is already hitting back, though, claiming that the lawsuit was an "unchecked abuse of authority."

The more than 200-page lawsuit, filed by James on Wednesday, accuses Trump and three of his children, Eric Trump, Ivanka Trump, and Donald Trump Jr., of grossly inflating the values of his businesses, including his hotels, resorts, golf clubs, and more. The lawsuit alleges that the former president deceived numerous financial parties, including lenders, accountants, and tax authorities.

Faced with a series of setbacks in eastern Ukraine, Russian President Vladimir Putin announced a “partial mobilization” of Russia's reservist forces on Wednesday. But some analysts say the move will have only a limited impact on the front lines of the conflict.

In a televised address on Wednesday, Russian President Vladimir Putin announced a “partial mobilization” of Russia's reservist forces to help boost the war effort in Ukraine.