WATCH: Ex-Trump adviser pouts like a toddler after C-SPAN viewer calls him ‘treasonous’ on air 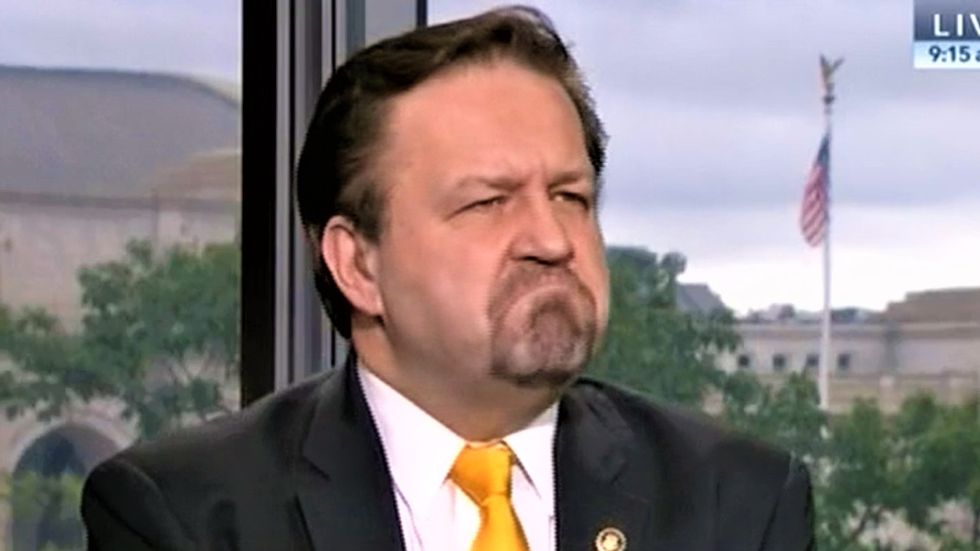 Former White House aide Sebastian Gorka went on C-SPAN's "Washington Journal" on Tuesday in which he encountered an angry Democratic caller who accused him of treason.

During the episode of the C-SPAN show, the caller began by thanking Gorka for making an appearance -- and then he proceeded to viciously attack the Trump administration.

"I just really look forward to when you and Corey Lewandowski, David Bossie and Don Jr., Jared Kushner, all of you are exposed for the treasonous b*tches that you are," the caller said.

C-SPAN promptly cut off the caller and the host apologized to Gorka for being subjected to a profanity-laced tirade.

Gorka, however, said that he wanted to comment about the nasty treatment he had just received.

"Why is there such hatred out there -- it's just un-American," said Gorka, who was not born in the United States. "This is a duly elected president! People need to get over the fact that we have a republic... This level of hatred -- not good for the health of the republic."

GOP candidate who touted 'back the blue' likely had 'aggressive' incident with police in 2018: report

A GOP Senate candidate who has consistently touted law enforcement and the "Back the Blue" movement was likely involved in an angry altercation with police in 2018, a new report said Friday.

According to a report from The Daily Beast, New Hampshire Senate candidate Don Bolduc was likely the person involved in a domestic disturbance with police officers in 2018 that required backup to be sent to his home. According to the dispatch log obtained by the Beast, the incident began when Bolduc's wife Sharon called 911 for a medical emergency for a man in his 50s, possibly Bolduc, and said he was reportedly experiencing chest pains and trouble breathing.

Sen. Tommy Tuberville (R-AL) and his wife recently earned as much as Alabama’s $52,000 median income in just two months of owning a single stock they purchased in July, according to a report at Al.com.

The Tuberville’s turned a 55 percent profit on their purchase of “between $100,001 and $250,000 worth of ChannelAdvisor Corp. Stock,” the website reported. The stock was roughly $14 per share at the time of the purchase, but “on Sept. 6, ChannelAdvisor Corp. announced it was being acquired for $23.01 per share,” the report said.

NEW YORK (Reuters) -A federal appeals court on Thursday ordered the dismissal of a National Rifle Association lawsuit accusing a New York regulator of stifling its speech by pressuring banks and insurers to stop doing business with the gun rights group.