'What a wiener': Colbert mocks Trump for being the 'you're fired guy' while being too afraid to fire Omarosa 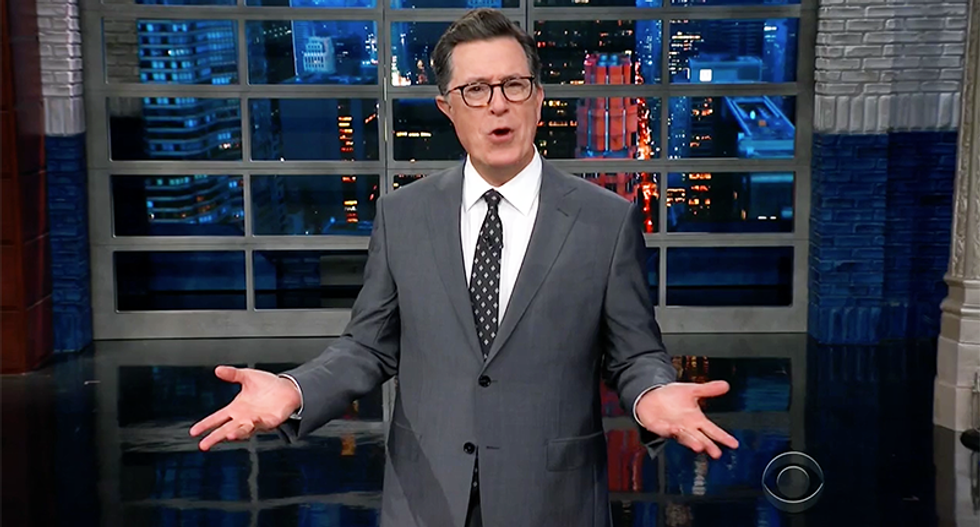 Stephen Colbert ridiculed President Donald Trump during Monday's "Late Show," for being too cowardly to fire Omarosa Manigault-Newman himself.

But if the media is saying Newman is a "liar and a back-stabber with no credibility," Colbert noted she's "exactly like everyone else in the Trump administration."

The CBS host played the accusations by Newman that Trump used racially charged language, including the N-word while taping "The Apprentice."

"Yes! Finally, we have proof that the guy who refused to rent to black tenants, said that a Nazi-Klan rally had some fine people, and called Africa a sh*thole is a racist," Colbert said.

When it came to the news that Trump was seen putting a piece of paper in his mouth, chewing and swallowing it, Colbert couldn't help but note that "the hunt for Trump's tax returns just got way grosser."

After playing a recording of Trump calling Newman after she had was fired, Colbert joked at the absurdity.

"What a wiener," Colbert called the president. "You're the 'You're fired' guy, and you're too scared to tell Omarosa she's fired? 'They fired you? Gosh, darn it. Oh, oh, cheese and crackers, I-- I don't love that you are leaving but, but I do love cheese and crackers.'"

That may have been Trump's response before, but on Twitter Monday morning it was something different.

In fact, Colbert illustrated the evolution by reading the tweets aloud like a petulant teenager. The comedian found it hilarious that Trump confessed to firing Newman four times. He explained it was like saying, "fool me once, shame on you, fool me twice, shame on you also. Shame on you for the other too as well."