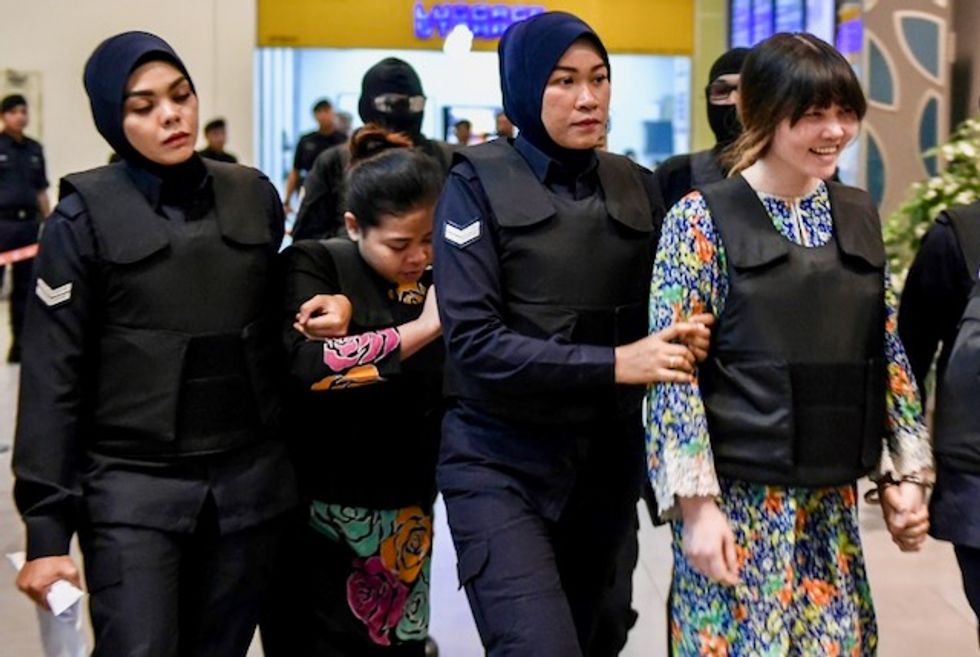 Vietnamese Doan Thi Huong (R) and Indonesian defendant Siti Aishah (2nd, L) are accused of assassinating the half-brother of North Korea's leader in a brazen hit that shocked the world

Two women accused of assassinating the half-brother of North Korea's leader in a brazen hit that shocked the world face a key court ruling Thursday, with their families hopeful they will be acquitted and return home.

After months hearing the prosecution's case about the Cold War-style killing at Kuala Lumpur airport, a judge will decide whether there is sufficient evidence to support a murder charge against Siti Aisyah from Indonesia and Doan Thi Huong from Vietnam.

If so, the trial will continue with the court hearing the women's defence. Alternatively if he decides there isn't, he could clear the women or amend the charge to something less serious than murder, which carries a mandatory death sentence in Malaysia.

Their families insist they are innocent, and were hopeful they would be cleared.

Huong "could never be a killer as she had always been a charming, hard-working girl," Doan Van Thanh, the Vietnamese suspect's father, told AFP.

Aisyah's mother, Benah, told The Guardian she believed her daughter would be set free.

"She never intended to kill anyone... She is my daughter and I believe her."

The women, in their 20s, are accused of killing Kim Jong Nam by smearing toxic nerve agent VX on his face in February last year as he waited to board a flight to Macau, with the man who was once heir apparent to the North Korean leadership dying in agony soon afterwards.

The pair claim they fell victim to an elaborate murder plot hatched by North Korean agents, and believed they were taking part in a prank for a reality TV show when they smeared a chemical classified as a weapon of mass destruction on Kim's face.

But laying out a case they described as like something out of James Bond movie, state prosecutors have argued the pair were well-trained assassins who knew exactly what they were doing.

The trial heard that four North Koreans -- also accused of carrying out the murder with the women -- recruited the pair and were the masterminds, providing them with the lethal poison on the day of the murder before flying out of the country.

However the women's defence teams have argued the pair, who came from poor communities in their home countries, are simply scapegoats as authorities are unable to catch the real killers, the North Koreans.

The lawyers have argued that the prosecution's case has been "shoddy" and has not shown that the women intended to kill Kim -- which is vital in proving a murder charge -- and say they are confident the pair will be acquitted.

If one or both of the women are cleared, they will not necessarily walk free immediately however. Prosecutors could seek to appeal the ruling, and authorities could still hold them over alleged visa violations.

"I really want her to be freed and get home," Doan Van Thanh told AFP, adding that he had been allowed to visit his daughter briefly in April.

"We just asked each other about health, and she only said to me: Daddy, please pray for me."