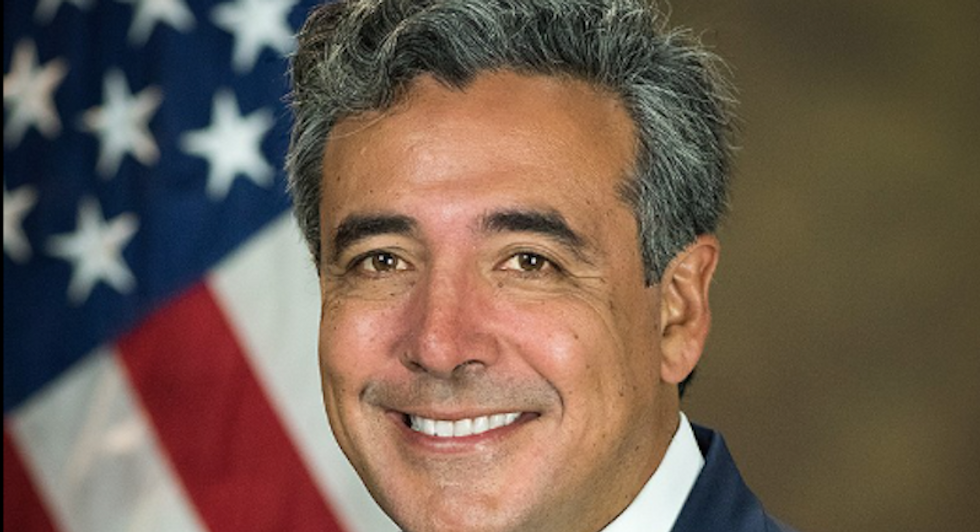 On Monday, Axios reported that Deputy Attorney General Rod Rosenstein has resigned, preempting his likely firing following revelations that he'd said—either seriously or in jest—that he would record the president in a bid to oust him from office.

Rosenstein's departure raises serious concerns that Trump will appoint a loyalist who will either hobble or completely upturn Robert Mueller's probe.

According to the legal blog Law and Crime, Rosenstein's most likely successor is solicitor General Noel Francisco.

Here's why that might be bad news for the integrity of the Russia investigation.

A look at Franciso's resume shows that he's committed to right-wing causes. After clerking for Antonin Scalia, Francisco spent his career working for the Bush administration, including representing George W. during the Florida recount.

Francisco has previously affirmed the president's legal authority to fire any subordinate.

“The president’s constitutional responsibility to faithfully execute the laws requires adequate authority to remove subordinate officers,” he argued in February. “The framers understood the close connection between the president’s ability to discharge his responsibilities as head of the executive branch and his control over its personnel…The president’s ability to execute the law is thus inextricably linked to his authority to hold his subordinates accountable for their conduct.”

Francisco was confirmed the day after Trump fired FBI Director James Comey, Vox reports. Francisco was asked how he would remain independent from White House influence.

“If confirmed, I will provide the President, the White House, and any other entity that I am called upon to advise with candid and independent legal advice,” he wrote.

4. Not a fan of special counsel

After serving in the Bush Justice Department, Francisco left government. Yet in 2007, he appeared to testify before Congress in defense of George W. Bush after the former president fired nine US attorneys.

“I don’t think it would be appropriate for the Department of Justice to appoint” a special counsel, he said, adding “my own personal belief is that when you hand these issues off to the career prosecutors in the public integrity sections in the US attorneys’ offices in the Department of Justice, those attorneys are generally better able to assess whether a case should be pursued.”

5. What this could mean for the Mueller probe

In his role, Francisco has the authority to shut down the Mueller probe. But even if the investigation continues, he might hobble the probe in more subtle ways, such as by blocking certain avenues of inquiry.

6. The FBI and Clinton

In a 2016 op-ed, Francisco co-authored an article that accused the FBI of treating Hillary Clinton with "kid gloves."