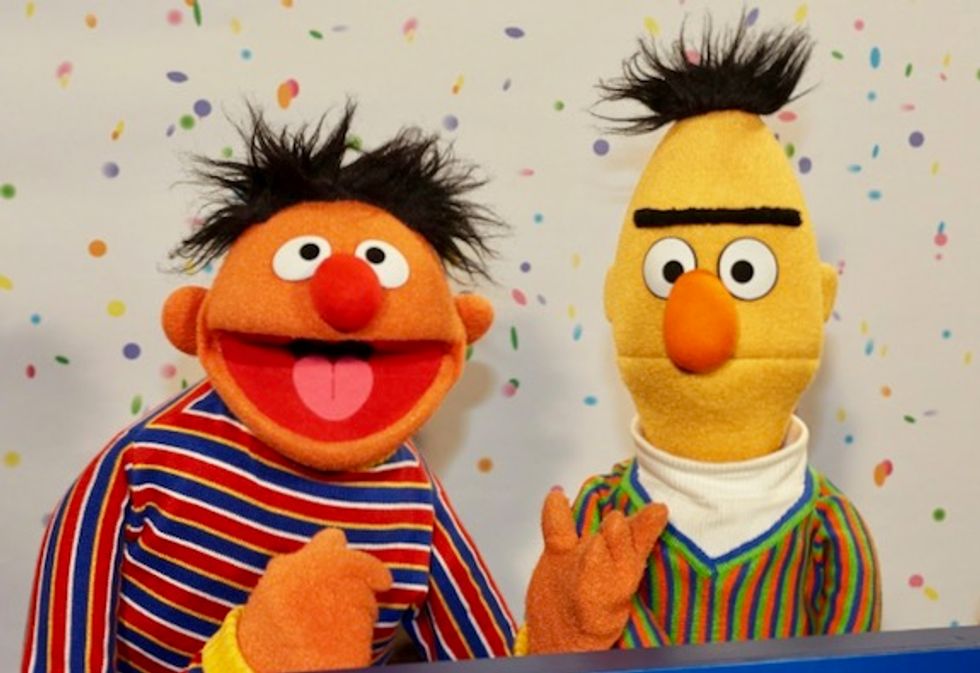 A longtime writer from the beloved children's show appeared to confirm puppets Bert and Ernie were in fact a "loving couple," only for the creators of 'Sesame Street' to deny the pair are together or have a sexual orientation DPA/AFP/File / Georg Wendt

Bert and Ernie of "Sesame Street" may only be puppets, but that hasn't stopped audiences from speculating over the years that the two roommates might be more than just best friends.

A longtime writer from the beloved children's show on Tuesday appeared to confirm they were in fact a "loving couple," only for its creators to deny the pair are together or have a sexual orientation. The writer, too, later seemed to backtrack.

Mark Saltzman, who was a staff writer on the program between 1981 and 1990, told the website Queerty he had based the pair's dynamic on his own long-term relationship with film editor Arnold Glassman.

"I remember one time that a column from the San Francisco Chronicle, a preschooler in the city turned to mom and asked 'are Bert & Ernie lovers?' And that, coming from a preschooler was fun," he said.

"I always felt that without a huge agenda, when I was writing Bert and Ernie, they were. I didn't have any other way to contextualize them.

"I was already with Arnie when I came to 'Sesame Street.' So I don't think I'd know how else to write them, but as a loving couple."

Saltzman added the Bert and Ernie's interactions mirrored his own with Glassman, who was his partner for more than 20 years until his death in 2003.

"I was Ernie. I look more Bert-ish. And Arnie, as a film editor — if you thought of Bert with a job in the world, wouldn’t that be perfect? Bert with his paper clips and organization? And I was the jokester," Saltzman said.

He said that he and Glassman were much like Bert and Ernie, opposites who found a way to love each other, the paper said.

"As a writer, you just bring what you know into your work," The Times quoted him as saying in a phone interview on Tuesday night.

"Somehow, in the uproar, that turned into Bert and Ernie being gay," he said. "There is a difference."

Sesame Workshop, which produces the show, denied the pair's relationship was anything more than platonic.

"As we have always said, Bert and Ernie are best friends. They were created to teach preschoolers that people can be good friends with those who are very different from themselves," the non-profit organization said.

"Even though they are identified as male characters and possess many human traits and characteristics (as most Sesame Street Muppets do), they remain puppets, and do not have a sexual orientation."

Saltzman's initial, seeming "outing" of Bert and Ernie is reminiscent of British author J.K Rowling's decision in 2007 to reveal that wizard Albus Dumbledore, one of the main characters in her Harry Potter books, was gay.

But while that disclosure caught many readers by surprise -- many have said there was no indication of the character's sexuality in the books -- the Sesame Street duo's relationship has long been questioned by viewers.

In 2011, gay rights activist Lair Scott launched an online petition signed by some 7,600 people that called for the pair to get married on the program to teach acceptance of gays and lesbians, spawning an extensive online debate on the topic as well as less popular pages opposing the two characters tying the knot.

In response, the show issued a similar statement to that released on Tuesday.

That did not prevent the pair from appearing on the cover of The New Yorker in 2013, shortly after the US Supreme Court legalized gay marriage across the country, which Saltzman described as a "kind of vindication."

They were shown cuddling on the couch watching a television that showed the Supreme Court judges.